Happy New Year everyone! I hope you all had a great night. Mine was, well, rather tame, but there’s always this year, right?! More importantly however, Sherlock is back! You don’t know how happy this makes me. It’s a big deal in my family, we got together and had a big home-cooked Sunday roast dinner before the main event. Okay, it might have been for New Year’s Day…

Spoilers ahead, obviously, so you’ve been warned!

My terrible memory of the Season 3 finale seemed to recall Sherlock being sent away on a plane after shooting Charles Augustus Magnussen, and then having to land almost immediately after a video(?) of Moriarty with his famous tagline ‘Miss Me?’ was broadcast. This of course left us all wondering, is Moriarty back? How? I mean, we still don’t really know how Sherlock survived The Reichenbach Fall, we never even considered the fact Moriarty survived it too! Of course there was also the mystery behind Mary’s USB stick and the initials, A.G.R.A.

The new episode, titled The Six Thatchers, started with the covering up of the security footage of Magnussen’s death, and reminded me exactly why Sherlock is such a brilliant character. Who else could get away with sending tweets and scoffing ginger nut biscuits at such a critical time? 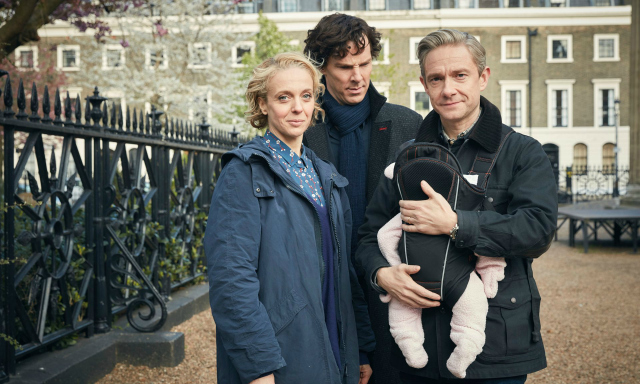 Soon afterwards Mary and John’s baby was born, and we followed the gang on a case. Moments like these are my favourite part of the show, watching in awe as Sherlock solves the mysteries with surprising ease, whilst being a lovable, big-headed idiot at the same time. The small case led on to something much bigger, a series of Margaret Thatcher busts being destroyed. For perhaps the first time in his life, Sherlock is trusting intuition rather than facts, as he tracks down why these busts are being targeted.

This is where I lost interest slightly, as the whole focus of the episode switched from case solving to being all about Mary and her past. I have nothing against Mary, but we had enough of her shady history at the end of Season 3, and I wanted something new. I get that it was still a case to be solved but I wanted to reach into the TV and shake Mary, why would she go on the run, leaving her husband and newborn child behind?! Surely she should have kown she would have been safer under Sherlock’s protection. Argh!

Of course, in the episode’s finale, I felt super guilty about my mean thoughts. I hope John can forgive Sherlock soon, because it really wasn’t his fault, Mary wasn’t even the target of the bullet, and I miss John and Sherlock together! I’m still not 100% sure if I understand what happened with A.G.R.A, AMMO, or the mean old secretary lady, I’m going to have to read into it I think.

All in all, it was a solid episode and I’m happy to have Sherlock back, but it didn’t have that fun factor that Season 3 had with the wedding. For me, that’s what the show is all about, some serious detective work with dry humour scattered liberally throughout. Maybe I’ve been building it up in my mind for too long. What sucks the most though is that in 2 weeks, it’ll all be over AGAIN!

8 thoughts on “Thoughts on Sherlock: The Six Thatchers”