After speeding through my first two books of the year at an alarming speed, I forced myself to read the longest book on my list next to slow myself down. The Fireman by Joe Hill definitely qualifies as long with a whopping 747 pages long. I guess this would be the part where I smugly tell you all about Joe Hill and how he’s the son of the legendary author Stephen King, but err, I only found that fact out myself after already finishing The Fireman.

Sigh…just when I thought I knew what I was talking about when it came to movies, I’m a hopeless novice all over again! 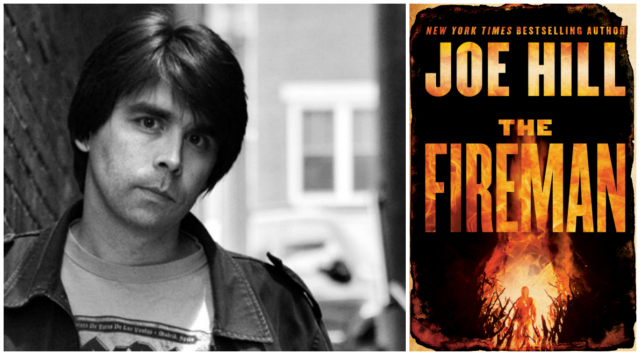 Let me tell you about the book, I can manage that much. The Fireman is the story of a worldwide pandemic of spontaneous combustion (called Draco Incendia Trychophyton) that is threatening to wipe out civilization. The symptoms are easy enough to spot, because an infected person has intricate, black and gold markings on their skin, nicknamed Dragonscale. There is no known cure for the issue, and attempts to look after the infected are leading to entire hospitals and cities being burnt to the ground.

Harper started out as a school nurse but when everything started going south, she moved to work at her local hospital to help as many of the infected as she could. When Harper herself becomes infected with Dragonscale, her husband Jakob is horiffied. The two of them had a pact to end their lives together if they were both to become infected, but when Harper realises she is pregnant, she choses to live instead. This sends Jakob crazy (literally) and Harper is forced to flee for her life.

She’s rescued by Captain America and Tony the Tiger (I’m only half-joking) who lead her to The Fireman, a man named John who is also infected, but not only can he control the spore, he can use it in a multitude of ways. To tell you how would be ruining the story. The Fireman leads Harper to a camp full of others like her, infected people who have learnt to keep the Dragonscale under control.

I’m not going to lie, this was tough to read. Firstly, I was well out of my depth. I don’t watch horror movies, and I’ve never read a horror novel, so it took me a while to get used to. Thankfully, my overactive imagination didn’t give me nightmares, but The Fireman would be a grim movie! It’s a long book, like I said, but it struggles with pacing issues. One day I would burn through (pun intended) several chapters without noticing the time, another it felt like every line I read was a chore.

Ultimately, it was worth it in the end. A long book means spending a lot of time with the main characters, and I really grew to love them. Except Jakob, who is possibly the world’s biggest douche bag. There are plenty of surprising twists and turns along the way, and never for a second did I ever think I knew how it would end.

If you have the time to spare, I would definitely recommend giving The Fireman a read. I think I heard that the rights have been sold to 21st Century Fox. I hope they’ll put it on the big screen soon! I think it would make a fantastic TV Series to be perfectly honest, but that’s just me!