Edit: I’m super late at posting this, because I fell off the planet last month. Nonetheless, you can see the original post at Drew’s Movie Reviews here, and see a recap of all of the entries for Drew and Kim‘s Ultimate 90’s Blogathon here!

Last year two amazing bloggers, Drew at Drew’s Movie Reviews and Kim at Tranquil Dreams ran an Ultimate 80’s Blogathon. It was a huge success and I was so pleased when they announced an Ultimate 90’s Blogathon! A huge thank you to them both for letting me participate more than fashionably late, and if you aren’t following them already you really should be!

I would like to firstly apologise to the fans of great cinema, and the professional bloggers who will be discussing the fantastic movies made and released back in the 90’s. I’m not here to do that, I’m afraid. Instead, I’d like to talk about my all time favourite movies from that decade, which is when I was still a kid, and shelving my Disney movies to discover the comedy genre. I don’t know how my brother and I stumbled across this movie, but every weekend my brother and I would find the time to watch Liar Liar (1997).

You either love Jim Carey or you hate him, he has a very specific way of comedic delivery, but I’ve always loved his movies. Since really getting into movies, it’s rare that I ever rewatch anything, because I’m always on the hunt for something new, but to this day I think I could recite the entire script of Liar Liar to you.

What is it about? Well, it has one of the most generic scripts of all time. Fletcher Reede (Jim Carey) is a professional liar. Sorry, I mean lawyer. He’s a busy man of course, and doesn’t have enough time for his son Max (Justin Cooper) or wife Audrey (Maura Tierney), who he is separated from. Making things worse is Audrey’s new fella Jerry (Cary Elwes) who is just the worst. On Max’s birthday, when Fletcher fails to turn up despite promising to be there, Max makes a wish, and wishes that for just one day, his father cannot tell a lie.

Cue the movie magic! Max’s wish comes true, leaving Fletcher unable to tell fibs. He’s now forced to tell the truth after an unsatisfying hookup, he tells a cop about the multitude of laws he broke when being pulled over, and tells a new starter in the lift at work that everyone’s only been nice to her because she has huge boobs. Whoops!

I wish there were more comedies like this being made. Yes, there’s some bad language in here (more than I thought actually, I can’t believe our parents let us watch this!) but so many recent comedies rely on nudity, drug trips or pop culture references to get laughs, and they just don’t age well at all. You can watch Liar Liar now, or in another 20 years time, and every single joke will still make sense and be funny. That’s what comedy should be all about! 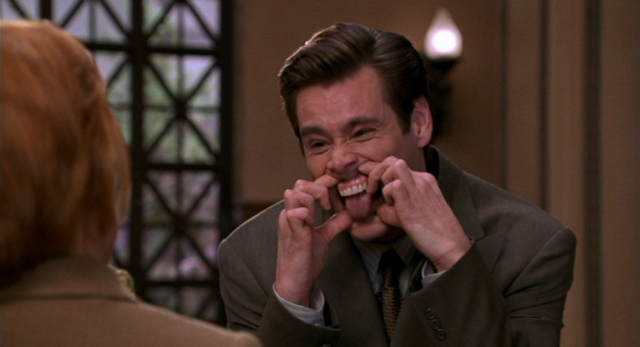 For me, it’s how quotable Liar Liar is that puts it up on the shelf of my all time favourites. Perhaps they’re inside jokes between my brother and I, but no one can hand either of us a piece of paper without us scrunching it up into a terrible attempt at an origami bird and saying “Mrs Cole…a goose!” Don’t give us a pen, either. We’ll tell you that the colour is rooooooooyaaaaaaal bluuuuuee. In fact, the more I think about it, don’t spend time with us when we’re together, we’re a bit weird.