I was feeling pretty blue last week, but a visit from my family and a chat about movies never fails to perk me up a bit. They’re forever taking recommendations from me, but this time I got some recommendations from them! Turns out one of my Mum’s favourite movies is Point Break (1991), a movie I’ve always known the name of but knew nothing about, and so not only did I give it a go last week, I also watched the 2015 remake so I could compare the two. 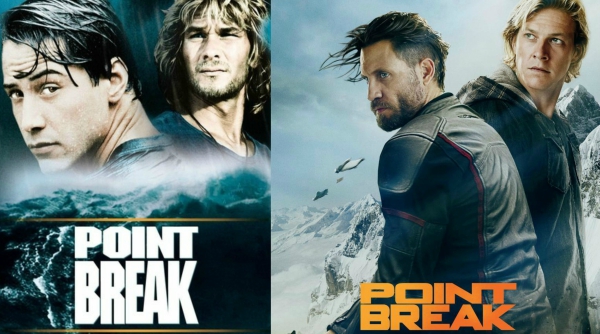 Let me explain the plot of the original first just in case you haven’t seen it yet either. There’s a group of people robbing banks dressed as former Presidents of the US, and thanks to some footage from one of the crimes, one detective has the theory that the criminals are surfers. Keanu Reeves is an undercover cop that worms his way into the surf scene in Los Angeles and ultimately finds himself becoming close friends with the leader, played by Patrick Swayze.

No need to beat around the bush, it was fairly obvious that the gang that Keanu Reeves got himself in with was going to be the gang committing the crimes. But that’s not really the point, because this movie has so much else to offer. It has tension, action by the bucket-load and a romance that doesn’t feel unnecessary or forced. It also has one of the coolest scenes ever (Keanu Reeves on his back shooting at the sky) that I recognised from being spoofed and referenced in other things I’ve seen. 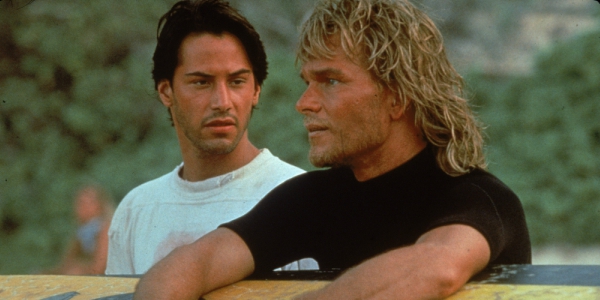 I loved the ending, too. I thought it would end with the bad guys being caught, the good guys live happily ever after, blah blah blah, but the actual ending was a welcome surprise to me. Plus dare I admit it, I feel a Keanu Reeves obsession coming on. Is this the right time to admit I’ve never seen The Matrix?

Anyway, it was whilst on a high from seeing Point Break that I decided I would watch the 2015 remake. Oh what a stupid mistake that was! It’s impossible to write something coherent and intelligent about the differences, but allow me to list some of the things that annoyed me the most:

– The actual bank robberies were mentioned briefly and that was it, rather than them playing a huge part of the story

– Any actual plot was thrown away in favour of stunts

– The only moments that were properly remade from the original were done in terrible ways. The moment Utah started shooting at the sky made me laugh it was so bad.

Honestly, they could have just copied the movie frame by frame, word by word and it would have been better. I’m all for giving an old story a new lease of life but the best parts were trashed and replaced with crazy stunts just for the sake of action.

Put simply, it was LAME. I’ll stick with the original, thanks!