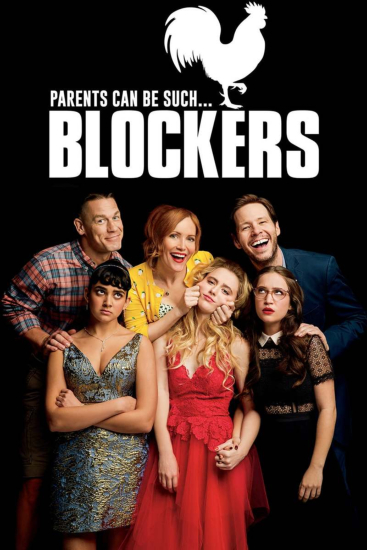 Plot: Three parents try to stop their teenage daughters from having sex on prom night after making a pact to all lose their virginity.

My Thoughts: I remember seeing the first trailer for Blockers, and just shaking my head knowing that it would be another of 2018’s terrible comedies. I didn’t even give it a second thought after that until recently when everyone I know seems to have seen it and loved it! That was enough for me to give it a go and see what the fuss was about. Whilst it’s not going to be in my Top 10 of 2018 anytime soon, it was so much better than it had any right to be.

There are plenty of laugh-out-loud moments, including one scene in particular which introduced me to an activity I’d never heard of before, ‘butt chugging’. Yes, it’s exactly what you think it is. I also got to feel like the old person I am discovering that all these emoji’s have hidden meanings. Who knew, eh!

On a serious note though, the story did drag a bit for me towards the end but it really is a decent comedy, and actually has a lot of heartfelt moments which tied in nicely, rather than sticking out like a sore thumb. If you’re looking for something fun to watch this weekend, you could do a lot worse than giving this a go.

Best Bit: John Cena and Ike Barinholtz sneaking their way into a house and accidentally taking part in a rather rude game involving blindfolds. I wanted to look away in horror but my eyes were glued to the screen!

Worst Bit: Realising that I have a daughter and that this movie may become reality for me in the future…

Fun Trivia: The backyard party scenes were filmed using the same set/location as Fences (2016), including the fence built by Denzel Washington’s character.
(I stopped reading any more trivia after spotting this because I just found it so hilarious!)

My Rating: 3 and a half out of 5 eggplant emojis which I hope I’ve never sent to anyone not realising what they really mean…