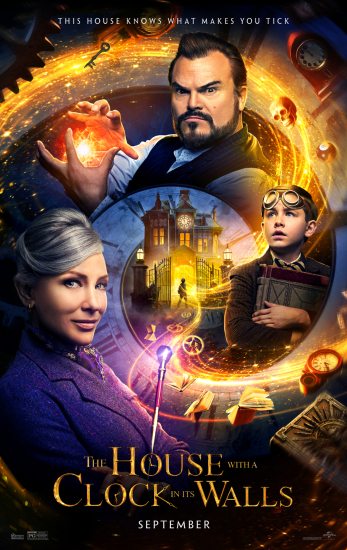 Plot: When a young boy named Lewis is orphaned he moves in with his magical Uncle in a large creaky house with a mysterious ticktock sound. Together, Lewis and his magical Uncle unlock the secrets behind the noise in the walls.

My Thoughts: After being subjected to the trailer for this movie more times than I ever needed to, as well as being plagued by the radio advert whilst at work, I made fun of it and vowed I would never actually watch it. I realise it’s based on a novel of the same name but come on, there’s not an ounce of creativity in that title! I guess I at least can’t claim false advertising…it does what it says on the tin!

However, I found myself with a free evening and nothing in the cinema with a decent start time than this and Mile 22. I very, very almost went with the latter hoping it would be so bad it would be good, but that day I’d read a few reasonably positive reviews about that house with a clock in the walls, so I gave it the benefit of the doubt.

You know, it wasn’t actually that bad. It suffers from trying to fit in with a few too many genres at once so doesn’t get a chance to shine in any of them, but there are worse ways to spend an hour and a half of your time. It also makes a decent family movie for the spooky season.

Best Bit: Cate Blanchett is just amazing in this as Jack Black’s neighbor. Her sarcastic wit was what really kept my interest!

Worst Bit: Jack Black’s head on a baby’s body…Ryan Reynolds just about gets away with having baby legs but this was just so wrong!

Fun Trivia: The bus stops across the street from a theater with the movie, “Space Man from Pluto” on the marquee. The head of Universal Studios wanted “Space Man from Pluto” to be the title of another Amblin Entertainment film produced by Steven Spielberg – but the director on that 1985 film kept the script’s original title, “Back to the Future.”

My Rating: 2 and a half pairs of steampunk goggles. My local cinema was giving away cardboard versions of these which have given me much entertainment as I attempt to convince my 11-month old to keep them on her head long enough for a photo!

Leave a Reply to Often Off Topic Cancel reply