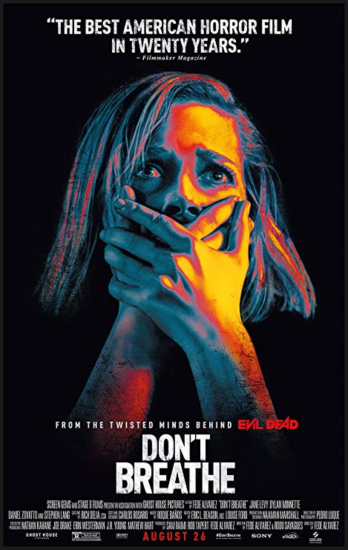 Plot: Three young friends put their skills and resources together to burgle houses. They find themselves targetting one house in particular when they learn of a sizeable fortune kept within, but their plans change for the worst when they learn the owner of the house is a blind veteran.

My Thoughts: This is the kind of horror movie I actively avoid, but whilst reading other blog posts and comments recently I’ve seen so many people mention Don’t Breathe and how good it was, and after wussing out on Netflix’s Haunting of Hill House (I can’t do it guys, I tried) I put on my big girl pants on got on with it! Who knew Clay Jenson was such a naughty boy eh?

Jokes aside, it’s a really decent movie. Scared the pants off me, and even pulled my husband’s attention away from his wargames – a high honour, I’ll have you know. It’s got a few cheap jumpscares in, but most of the scary moments are just in the atmosphere and wondering when the CREEPY BLIND GUY IS GOING TO TURN UP AGAIN. I would never make it as a criminal…

Best Part: This was originally going to be my worst part. When the girl is hiding in the closet sending a text message to Clay Jenson. WHY. DON’T DO THAT. I started flapping my arms about trying to convince her to put her phone down, and lo and behold, once she hit send on that message, MY PHONE WENT OFF. It’s a good job it’s a well-loved and battered phone in the first place because it ended up on the floor.

My Rating: My husband gave me a look of disgust when I suggested using turkey basters as the rating, so Don’t Breathe gets 4 out of 5 ‘quiet’ signs…that means keep your phones on silent!