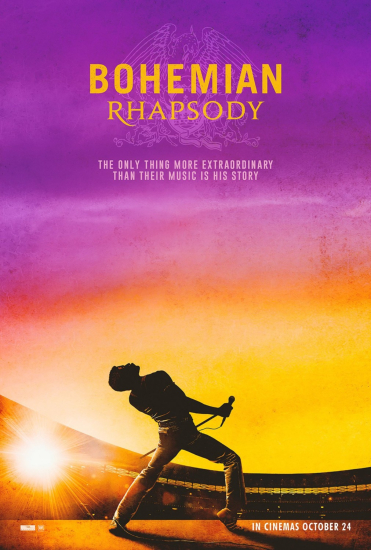 Plot: The real-life story of how the legendary rock band Queen came to be, starting with how they got together and ending with their epic performance at Live Aid in 1985.

My Thoughts: Sometimes I’m the worst English lass in history. I don’t drink tea (only herbal), I’ve never watched Downton Abbey or Doctor Who, and I’m not a Queen fan. I do eat biscuits and complain about the weather though, that’s the only thing keeping me on this odd little island I guess.

Anyway I digress, but I wanted to make the point that I’m coming at this movie knowing nothing about Queen apart from the lyrics to no less than 5 of their songs. I can’t speak for how well Rami played Freddie Mercury, because I’ve never watched a performance of his – but in a way, I think that’s why I was so set on watching Bohemian Rhapsody, I wanted to know Queen’s story.

Due to me mixing up screen times, my old blogging bestie Jenna and I ended up having to watch the movie in IMAX – and oh boy am I glad we did. (My husband will be laughing to himself reading this because I rarely shut up about how much I love IMAX. It’s amazing, ok?!) If the room was emptier we would have been up on our feet stomping and clapping for We Will Rock You, it was a brilliant experience.

I really enjoyed Bohemian Rhapsody anyway, and I drove home playing the album on the loudest volume my car could take before it started vibrating. I dig what Queen stand (stood?) for, and it’s amazing what the band achieved. I can’t help but feel some of the story along the way has been dramatised (maybe it hasn’t – who am I to judge?) and I felt the focus of the story lost its way around the half-way mark, but those are my only real complaints. 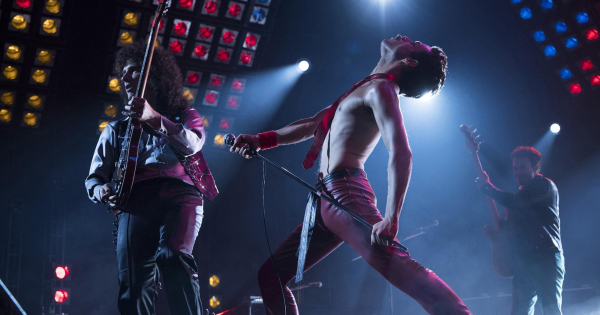 Best Bit: The Live Aid concert for sure. By that point, I’d been converted into a fan and with the IMAX surround sound, it really gave me quite a thrill!

Worst Bit: Paul. Everything about him. Was his part in the Queen story exaggerated for the movie? I don’t know – but he was a venomous snake. May his phone be forever on low battery.

Fun Trivia: Sacha Baron Cohen was the original choice to play Freddie Mercury. He left the project due to creative differences with the band’s guitarist Brian May and drummer Roger Taylor. The deal with Baron Cohen fell apart after May voiced upset after finding that the project would only be a biopic of Freddie Mercury and not the rest of Queen. May felt that it should focus on the other members and the aftermath of Mercury’s death. He also voiced his negative opinion of the casting choice of Baron Cohen, whom he felt was too much of a comedic actor who wouldn’t do Mercury justice in drama.

My Rating: 4 out of 5 of Freddie Mercury’s cats. Did he have 4, or 5? I can only remember that tabby one that gave the best dirty looks.