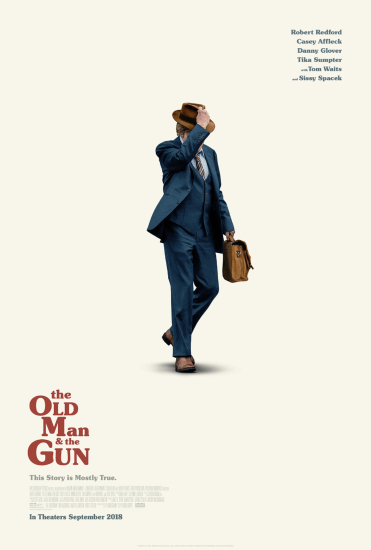 Plot: The real-life story of Forrest Tucker (Robert Redford), including his amazing escape from San Quentin at the age of 70 to a long string of heists that followed. Chasing Forrest down is Detective John Hunt (Casey Affleck) who is fascinated by both Forrest and his crimes.

My Thoughts: I got to see The Old Man & the Gun over a month in advance of its December 2018 release in the UK, thanks to ODEON’s Screen Unseen. They release 4 ridiculously cryptic clues in the run-up, although it’s reasonably easy to whittle down what few movies it could be based on release dates alone. This time though, I was so convinced it was going to be Widows (2018) that I would have offered to reimburse everyone’s tickets if it wasn’t. Not only was I wrong, but it was also a movie I had never even heard about!

This, however, led to my first completely blind cinema showing which was pretty exciting. I just wish I had loved the movie more than I did. Don’t get me wrong – it’s a fascinating movie, and I can’t believe that it’s a true story. It’s just…for a movie all about bank robberies…it was kind of dull!

I’m just not the target audience for this at all. I’m sure Robert Redford fans will have an amazing time, and rightly so, he puts in an excellent performance, but it was just too quiet and understated for me. When it finished, I heard the man next to me turn to his cinema buddy and say “I really liked that. It was a nice movie.” I think he summed it up perfectly – this is a nice movie.

Best Bit: The bemused faces on Forrest’s victims as they recount the crime, commenting on how much of a gentleman he was and how happy he looked made me chuckle every single time. That, and the ending got a laugh out of everyone in the room too.

Worst Bit: Not necessarily a bad moment but when John hands Forrest a $100 bill I couldn’t understand why. Was it the same bill that Forrest left a note for John on? It didn’t look the same. Was he simply paying him back, settling their debt? I don’t know!

Fun Trivia: In an interview he gave during the 2018 Toronto International Film Festival, Robert Redford talked about this comedic film being a good note to end on, since the actor wanted his “last acting job to be fun.”