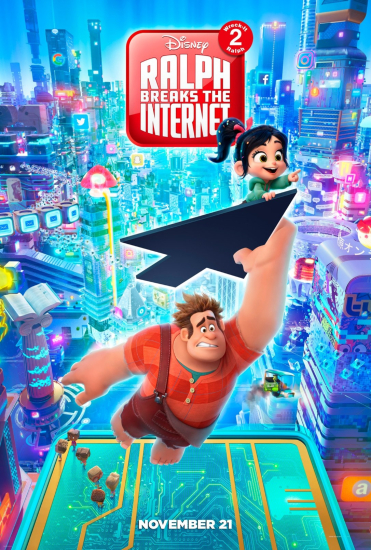 Plot: When Vanellope’s game is broken and at risk of being taken away for good, she and Ralph venture into the Internet in order to save it.

My Thoughts: I’m always cautious of sequels but I was so excited by the trailers for Ralph Breaks the Internet that I couldn’t help but get myself hyped up. There is so much to love about this movie, and the creativity behind bringing the Internet to life was brilliant. I’m one of the few that didn’t hate The Emoji Movie, but regardless, Disney have outdone themselves here. There are so many details it would be impossible to list them all, but highlights of mine include the Search Bar (including several autofill jokes), the eBay layout and the way some video game characters move.

Other things to love? The moment Ralph and Vanellope enter Oh My Disney. I wanted so much more of that. Of course we already knew the princesses would be making an appearance but it doesn’t get old. We even get Stormtroopers! And who else here is guilty of taking at least one ‘Which Dinsey princess are you?’ quiz?

I realise that the target audience here is children but where the movie fell flat for me was the moral message behind it all. Yes, there’s an interesting story here of how best friends move on, but I don’t think it was handled in the best way, and since when was Ralph quite so insecure?

Best Bit: Vanellope gets her own musical number in this movie, and it could not be more glorious. Disney have been great in the last few years and poking fun at themselves, and that’s what makes ‘A Place Called Slaughter Race’ so amazing. Is it available on Spotify? I had to check, I couldn’t wait to find out the answer…IT IS. Apologies to any passenger I happen to have in my car over the next 2 weeks – this is going to be on repeat.

Worst Bit: The big ‘virus’ scene at the end just went on a bit too long, and you know what? It was so creepy! I honestly felt worried for the small kids in our screen, it really was the stuff of nightmares. Plus, we were told how the virus could be destroyed, but that’s not how it ended up happening? Nit-picking I know, but still…

Fun Trivia: When an Internet advertisement tells Ralph “Sassy housewives want to meet you,” the woman on the image is Aunt Cass from Big Hero 6 (2014).

My Rating: 4 out of 5 glass slippers, which Cinderella isn’t afraid to smash in order to shank you!