Plot: Liberty Mean is a struggling Black Owls parody band. When one of the members’ brother chooses their story as a video project, we get a glimpse into their lives as they attempt to raise the money needed to get them to the SXSW (South by South West) festival in order to find fame.

My Thoughts: I have fond memories of the time I actually got to visit SXSW through work, and the fact that Mock and Roll has already won awards in the film festival circuit was enough to convince me to give it a watch. It’s also being compared to This Is Spinal Tap (which I’m yet to see) so it had to be good!

In the first 5 minutes, we find out that the band has gone to an extreme length to raise the funds they need, landing themselves in jail. I should have taken note of this scene as a sign of things to come but straight afterward we’re given a proper introduction to each of the band members, Robin, Rick, Tom and Bun. I think I could quite happily watch a TV Series about these 4 characters, I really warmed to them instantly. They’re the true definition of opposites attract in some ways.

Another highlight was the soundtrack. Admittedly I’ve never listened to Black Owls so I didn’t know the original lyrics to the songs being parodied, but there’s music aplenty in the movie and it’s performed really well. I’d definitely recommend Mock and Roll to both movie fans who like to watch something a little different and indie, and also to rock music fans. 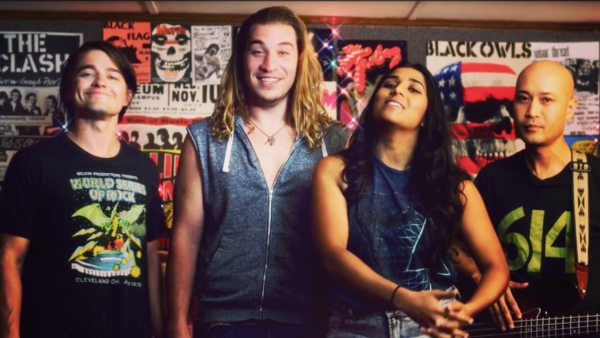 Best Bit: Bun has some great movie trivia to share with the group, which I think redeems him from the terrible decisions he makes to help the band raise money! It was in these moments that the movie surprised me with its twists and turns.

Worst Bit: I think the only thing is, I would struggle to sell this movie to friends and family who exclusively watch wide-release and blockbuster movies. It’s a low budget indie movie and it shows – but if you’re open minded there’s a lot to like.

My Rating: 3 and a half priceless pieces of art out of 5, which, if you’re ever asked to transport to a total stranger in exchange for a lot of money, you should consider asking why.

Note: I was provided with a copy of this movie in exchange for an honest review.