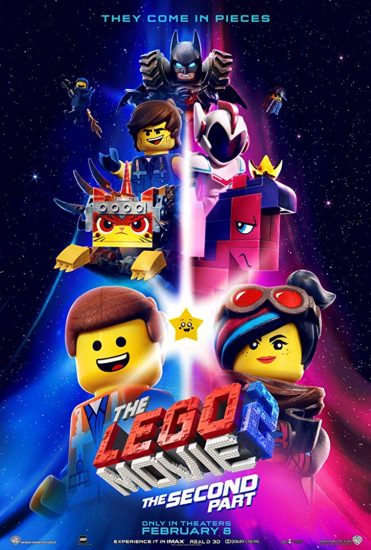 Plot: The Lego Movie 2 picks up right where the last one left off – with the Duplo bricks taking over. It’s now 5 years later and things are getting worse. Emmett and his friends are now facing invaders from outer space, destroying anything that looks cute.

My Thoughts: It’s weird to think that this is the only sequel to the original Lego Movie thanks to the spin-offs we’ve had. I almost think its taken a bit of the excitement away but nonetheless, I was really looking forward to checking in with these beloved characters. I love animation, I love comedies and I love Lego, so I knew I would enjoy this.

There are some things I knew I could expect from the sequel. Witty one-liners, and the kind of jokes I’ve come to love from both Lego movies and games. Inventive names like the Sis-Star System, and Queen Whatevra Wa-Nabi. Will Arnett continues to be my favourite Batman yet (sorry Christian Bale) and inside jokes you’ll only understand if you watched the original. “Honey, where are my pants?”. So it’s safe to say the writers know what works and stick to their guns!

What I wasn’t expecting was to fall for was *MILD SPOILER* the Frozen-style plot twist halfway through. Why am I so gullible?! It felt like this installment was more geared towards children than the original, with its morals and family-orientated story, but that’s hardly a negative comment. To be honest, I’ve never really grown up, so you’ll find me in my car on the way to work playing Catchy Song and Gotham City Guys on repeat. The extra songs were a welcome addition!

All in all, though it might have lost the original magic that the very first movie had, The Lego Movie 2: The Second Part is still a solid movie!

Best Bit: Rex Dangervest, Galaxy defending archaeologist, cowboy, and raptor trainer. You may as well have just called him Chris Pratt, he’s covered all of those roles now! Thinking about it…that was probably the joke…wake up, Allie.
Plus Queen Whatevra Wa-Nabi’s song was funny enough to begin with, and even funnier once you’ve seen the whole movie.

Worst Bit: So many cool characters from the first movie ended up being pointless in the sequel, and it felt like they’d just been stuck in for the sake of it. I’m looking at you, MetalBeard, Benny, Surfer Dave…I’m sure I spotted Good Cop/Bad Cop at one point, too.

Fun Trivia: Actress Stephanie Beatriz (Sweet Mayhem) has a signature small scar on her right eyebrow which was caused by, ironically enough, tripping on a piece of LEGO when she was 10 years old.

My Rating: 4 out of 5 Lego Duplo sets. I’m holding on to every day that goes by that my living room floor isn’t covered in these bricks. Thankfully, the Mega Bloks we have at the moment are far too big to be dangerous to my feet.