Plot: Set during World War II,  Captain Miller and his assembled crew are sent to find Private James Ryan and send him home. His 3 brothers have been killed in action and all 3 telegraphs are set to be sent on the same day to his Mother to inform her of the terrible news. To alleviate her grief the Chief of Staff decides that Ryan should be pulled from the war.

My Thoughts: War movies have never interested me, but in my recent quest to watch all Oscar Best Picture nominees when awards season rolls around, I found myself at the cinema to watch Hacksaw Ridge (2016) which exceeded all my expectations. I don’t think anyone can talk about war movies without at least thinking about Saving Private Ryan (1998) so the Blind Spot Series was a great opportunity to watch the classic and expand my horizons a little.

Straight away you’re hit with a wall of emotion. We see a survivor of the war in his old age, although we don’t know who, as he visits the graves of his brothers, and then we’re transported straight into one of the battles. It’s raw, it’s gritty, it’s tense and uncomfortable to watch, and yet I couldn’t tear my eyes away. We’re literally in the thick of it with these soldiers, and we’re in it for the long haul.

At just under 3 hours this is one of the longest movies I’ve watched, and so I made the decision to watch it in two sittings but to be honest, I could have happily watched it in one go, you don’t notice the time at all. There’s always something going on, and even in the quieter moments you know it’s just a build up to the next big thing. 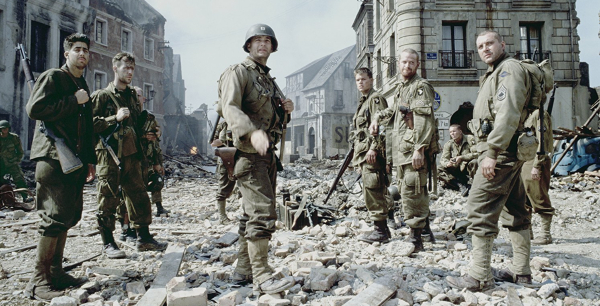 Best Bit: I’ve always associated Giovanni Ribisi with the TV Show Friends, so much so that I can never remember his actual name, I call him Frank Jr. I know him from small, comedic roles so it was a surprise to see him here. He was AMAZING. The guy has some really incredible talent, and I can’t believe it’s the only serious role I’ve ever seen him in. He deserved award nominations for it, without a doubt.

Worst Bit: There’s no denying that Saving Private Ryan is an incredible movie. I’m not a converted war movie fan, though. Watching this, watching Hacksaw Ridge, watching Dunkirk (2017), they were amazing experiences, but to me, they aren’t ‘enjoyable’ in the same sense as other genres, if that makes any sense?

Fun Trivia: Steven Spielberg cast Matt Damon as Private Ryan because he wanted an unknown actor with an All-American look. He did not know Damon would win an Oscar for Good Will Hunting (1997) and become an overnight star before the film was released.

My Rating: 4 and a half out of 5 pairs of standard-issue socks that you can turn into sticky bombs if needed.

The Blind Spot Series was created a few years ago by Ryan at The Matinee, and is now hosted by Sofia at Returning Videotapes. As part of the Series, bloggers choose 1 movie to watch and review each month that is deemed a ‘classic’ or ‘must-watch’. To see the rest of my picks for the year, check out my announcement post here.