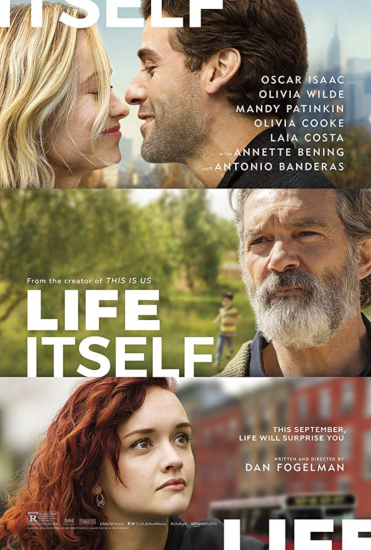 Plot: Will and Abby fall in love at college, get married and have a child. But after a cruel twist of nature, tragedy befalls them and the aftershocks affect more people around them throughout the years.

My Thoughts: I don’t know why, but this week I’ve been making an attempt to catch up on the movies I missed which have been hailed as being terrible – it’s an odd hobby but there’s a certain guilty pleasure about awful movies. I’ve seen Serenity (2019) but I can’t put my thoughts into words on that yet. Today I’m talking about Life Itself, but let me share an odd fact about myself first. When I was a kid I’d let my thoughts run away with me. I’d wake up in the night needing the toilet but I was afraid I would wake my parents, and my thoughts continued until I’d caused World War 3 just by having a wee at 2am.

It feels like that’s the kind of message this movie is going for. One small event can lead to much bigger consequences. Or maybe not. Who the hell knows, because this movie is all over the place. I didn’t hate it though, I actually almost loved it. During the opening scenes, I was baffled as to why the movie was so hated. I’d like Samuel L. Jackson to narrate my life, please. I also would have quite happily watched a drunken Oscar Isaac singing in a cafe for the entire movie because the biggest problem for me was the start of the movie was the best part.

If you’re looking for a sappy rom-com this certainly isn’t it, it’s one of the most depressing things I’ve ever watched, but there is at least a beautiful message at the end of it all that brings some hope to the melancholy. From what I’ve read, the haters have called it ‘2018’s Collateral Beauty’ and I can’t argue with that. I guess the problem is I really enjoyed that movie!

Best Bit: Any of the scenes with Oscar Isaac and Olivia Wilde together. They’re so sickeningly cute, and their dog has the best name ever. Can we please have the rom-com we deserve?

Worst Bit: Once the story switched over to the Gonzales family, that’s where it started to lose me. They were introduced too late into the movie for me to invest in them and so to be brutally honest I just didn’t care that much for their drama.

Trivia: During the writing of the film, Dan Fogelman listened to Bob Dylan’s album Time Out of Mind and in particular the song Love Sick, which opens the film. Written after the divorce of the singer of his second wife, this double album, dating from 1997, speaks of love and mourning with melancholy.

My Rating: 3 double espressos in large cups, that a drunken Oscar Isaac will want to pour 2 healthy measures of whiskey into before staggering about, trying to serenading you.