(I’m on holiday right now celebrating my 30th Birthday! To fill the void whilst I’m away I’m posting some old movie reviews that I wrote for the blog I had before I started Often Off Topic. I’ll be back in early September.) 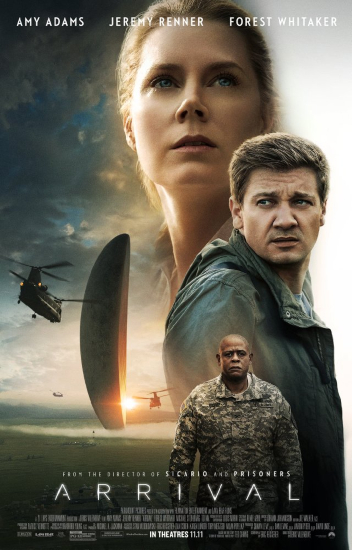 Oh boy. I know this year has been a bit of a stinker for blockbusters, but overall I personally think it’s been a fantastic year, and now a new movie has rocked up threatening to become my favourite of the whole year. November, you are awesome. This also means that I’ve been to the cinema for two weeks in a row, which is honestly the first time that’s happened all year. Two Amy Adams movies in a row, too!

Arrival is directed by Denis Villeneuve, the master behind Sicario, Prisoners, Enemy and Incendies. He’s currently working on Blade Runner 2049. This man is fantastic, I can’t emphasise that enough. I haven’t watched a movie of his yet that hasn’t wowed me, and Arrival is no exception. The UK has been marketing the hell out of this flick, in fact, last time I was at the cinema, during the trailers we were shown 2 different Arrival trailers in a row. It was starting to get on my nerves a tad, but only because I didn’t want to know so much before going in.

First and foremost, this isn’t a Sci-Fi in the typical sense. It’s an alien invasion, for sure, but if you’re expecting Independence Day then this isn’t the movie for you. The world is most definitely at risk here, but there’s no room-shaking action sequences or alien punching of any kind. Our main character is Louise (Amy Adams), an expert linguist recruited to work with scientist Ian (Jeremy Renner) to learn from the aliens what their purpose on Earth is. Twelve pods have descended in seemingly random locations around the world, and they don’t seem intent to blow us into smithereens.

I never excelled in science, and I can’t speak a second language, so I was grateful for the fact that I could easily understand what was happening during the movie, and actually found myself completely in awe of the linguistic work that Louise was doing. It’s fascinating stuff! How she went about teaching the aliens (heptapods, if you’ll excuse my most likely bad spelling) simple vocabulary, to lead up to actually asking a question was something that seemed impossible at first, but when broken down into stages, actually made a lot of sense.

Louise herself is a captivating character. We are drawn to her instantly and warm to her within the first few scenes when we’re shown a tragic moment in her life. She feels so real, and relatable. I’m pretty sure if we were sent up into a pod to talk with an alien we would freak out as much as she did, rather than staying cool and calm, with our hair and make-up perfectly intact. But I’m getting off-topic now.

I’m almost trying not to talk about the movie to be honest because I want to be really careful about what I say. The less you know, the better, because the final 20 minutes of Arrival was one of my favourite movie experiences ever. That feeling in your mind of everything clicking into place is just amazing.

Safe to say, my husband fully forgave me for scaring the crap out of him last week when we saw Nocturnal Animals, and he’s even gone so far as to say this might be his favourite movie of all time! It’s definitely threatening to become my favourite of the year.