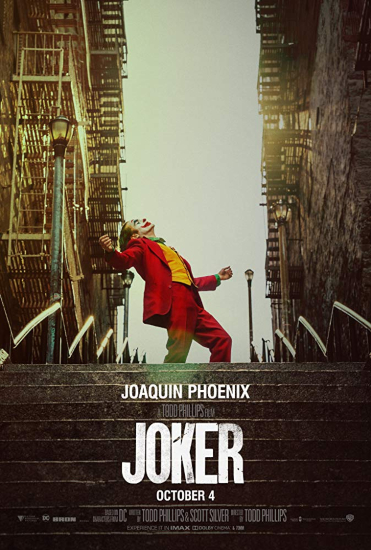 Plot: Simple enough, this is the story about how a troubled man called Arthur Fleck descended further into madness and took a name familiar to most, Joker.

My Thoughts: Let’s skip past all the drama and controversy around Joker for this post, shall we? Enough people have covered it far better than I can, anyway.

I wasn’t expecting to love this movie. I hated the last Joaquin Phoenix movie I watched, I’m not a big Batman fan, and whilst I avoided reading too many reviews before I got to see it myself, I kept seeing Joker being compared to Taxi Driver…a classic which I can’t stand! So yep, I was surprised by how much I enjoyed it. Although, enjoy and love are two strange words to use to describe your feelings for Joker, because it’s dark. Hella dark.

In fact, in between feeling uncomfortable, our audience laughed quite a few times during the movie. Not because we’re all sickos who found what Arthur was doing funny, but because the tension was getting so thick we seemed to find that collective nervous laughter was the best way to relieve it a little! I always find that the best bad guys are the characters who are utterly evil, but you can see and sympathise with how they ended up that way. You don’t have to condone their actions at all, but you can understand them.

Noone (in their right mind) thought Thanos’ idea to wipe out 50% of the planet with a click of his fingers was a good act, but we couldn’t help but admit that he had a point, you know? I hope the Academy throw some love this movie’s way, even if it’ll inflate Todd Phillips’ ego even further…maybe we’ll get some more stupid quotes from him!

Best Bit: When Arthur made his appearance on Murray’s show. I felt like I knew how that scene was going to pan out, but it still didn’t prepare me for that moment.

Worst Bit: *BIG SPOILERS* The second we got to see a young Bruce Wayne I thought to myself, if we have to sit through Batman’s goddamn origin story one more time I will scream. WHY do we need to keep seeing this?! We KNOW what happened. It could have been left as a subtle hint, just a glimpse, something off-camera, but no. Let’s make a big deal of it. Again.

Fun Trivia: The ending of the film where the Joker is in Arkham is meant to be ambiguous as the viewer is given to draw a line about what exactly did happen and did not happen throughout the movie because everything is from Arthur’s perspective. This is further hinted when he says to the doctor “You wouldn’t get it” when he was asked what he finds funny implying that the whole thing was one big joke to him.

My Rating: 4 and a half guns which you should NOT take with you to work if you’ve got a gig pretending to be a clown in a children’s hospital…