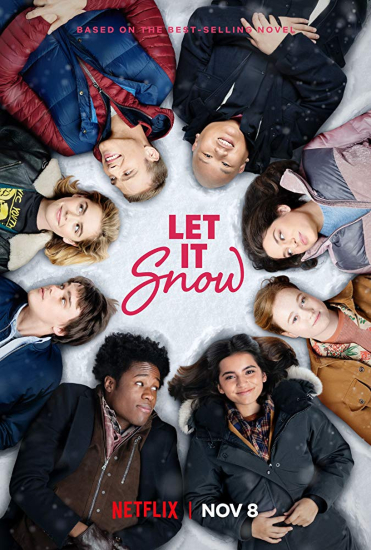 Plot: On Christmas Eve, a series of circumstances and events, as well as a snowstorm, brings together a group of teenagers in a diner.

My Thoughts: Every Friday, Netflix is releasing a new Christmas movie for us to enjoy. They’re all going to be that ‘Hallmark Channel’ kind of quality but hey – isn’t that what Christmas is all about? I for one can’t wait, and have promptly cleared all of my Friday nights from now till the big day! Let It Snow is Netflix’s contribution to the Love Actually category, in where all these characters find their stories intertwined by the time the credits roll. It’s also one of the best (worst?) movies I’ve seen for finding yourself having to pause and say ‘I know him/her from something!’. I swear I stopped the movie at least 6 times in the first 10 minutes.

By far the most interesting story here for me was Stuart and Julie (played by Shameik Moore and Isabela Merced). Stuart’s a famous musician and meets Julie on a stranded train where he mistakes her for a fan. She, in fact, couldn’t care less who he is and is struggling with deciding whether to accept a scholarship and leave her sick mother behind. It’s a cheesy story but they both have such great chemistry, and the other stories fell to the wayside a little.

So no, it’s no Love Actually, but it’s far better than the other copycats out there, and even if it’s a little too silly for you, the soundtrack makes it worth your time, too. Who doesn’t love Whole of the Moon by The Waterboys? And if I still haven’t sold it to you, let me tell you this. Bad Janet is in it! Like, almost literally Bad Janet. I watched Let It Snow straight after catching the latest episode of The Good Place and thought I was tripping when she showed up.

Best Bit: Tobin turns up fairly early in the movie, and I KNEW I knew him from somewhere, so much that I refused to look it up for ages. I was practically shouting at my husband, I can picture him now, he’s singing, he’s really well dressed, why can’t I work out what he was in?! Oh, he’s Ben in Disney’s Descendants. That character I have an embarrassing crush on. Wait, I put this in ‘Best Bit’? Whoops.

Worst Bit: Joan Cusack plays ‘Tin Foil Woman’, a woman driving a truck whilst covered in tin foil, dishing out stellar advice whether it was asked for or not. Husband claimed early on that she wouldn’t be real and we were both a little disappointed that his theory didn’t turn out to be true.

Fun Trivia: The movie “Let It Snow” is an adaptation of the book by John Green, Maureen Johnson and Lauren Myracle.

My Rating: 3 and a half waffles – and on that note, is there a waffle house in existence that sells those Waffle Quaffles? Because damn, they looked tasty.