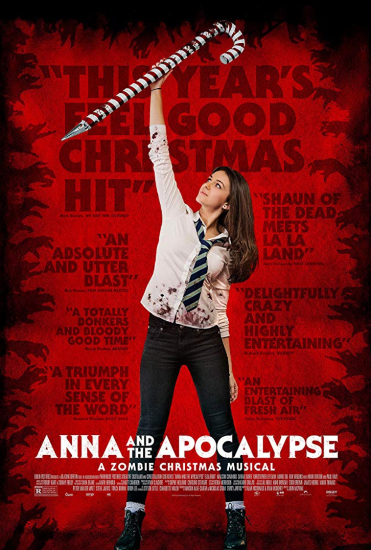 Plot: A zombie apocalypse has struck the quiet town of Little Haven. Anna and her friends are approaching the end of their time at Sixth Form and face difficult situations in their lives. Together, they fight for the survival, to the tune of a catchy soundtrack.

My Thoughts: Anna and the Apocalypse was all over my blog feed last month. I’d barely heard of it until then but from what I read it was a hilarious zombie musical, which, lets face it, sounds downright amazing. I didn’t manage to track down a copy in time for Halloween but just like The Nightmare Before Christmas, this movie fits into that perfect little niche of being a spooky movie and a festive movie! Huzzah!

Let’s get straight to the point, we all knew I was going to like this movie. The songs are super catchy, it’s funny, a bit scary, and just all round good fun. Typically though, I started watching it late at night and only stayed awake for the first half. The day after I was at the cinema to see Last Christmas, which, if you didn’t know from my review or Twitter yet, broke my heart into a million pieces. To cheer myself up I thought the second half of Anna and the Apocalypse would be the perfect remedy.

Slight spoiler alert? IT WASN’T. I won’t ruin the movie for you of course, but let me just say, pay particular attention to the lyrics of the songs. No Such Thing As A Hollywood Ending in particular. My nerves were already on thin ice and I ended up falling into a pit of sorrow by the end of this. I highly recommend it, though. If you’re a fan of movies like Shaun of the Dead and don’t mind a cheesy musical, this is perfect.

Best Bit: The Headmaster was already hilariously evil, but when Anna and co went back to the school to find he’d completely lost it? Brilliant – and his song had me in stitches! I also loved the irony of the song where Anna’s walking to school that morning and everything is completely falling apart behind her.

Worst Bit: I came here for gore and jokes, not to have my heart pulled out from my chest. Or maybe I’m just an emotional wreck anyway, who even knows anymore.

Fun Trivia: One of the posts seen in the #EvacSelfie bit was from “Ash Campbell” – a mashup of Ash Williams/Bruce Campbell from the Evil Dead franchise.

My Rating: 4 out of 5 Christmas dinners you’ll find your creepy headmaster eating whilst zombies take over your school.