Plot: Tom Junod is a journalist known for delving deep into the subjects he writes about, seeking the truth. He’s a cynic by nature with a terrible relationship with his Father, but when put on an assignment to write a piece on the legendary Mr. Rogers, his views are changed.

My Thoughts: I have to admit straight off the bat – I struggled with this movie. Mr. Rogers’ show wasn’t a thing in the UK so I know next to nothing about him, but that wasn’t my problem. I just felt like two very different movies were thrown together to make one, and one that didn’t gel together. I loved Tom Hank’s role, I loved seeing how compassionate Mr. Rogers is and how he deals with the mental burden of everything he deals with. I could have happily watched an entire movie about him, so I guess I should turn to 2018’s Won’t You Be My Neighbor?.

On the other hand, we have Tom’s story. Tom is married more to his job than his wife and hasn’t spoken to his Father in years, since his Mum died and his Father moved on quickly. It may be a story based on real-life, but it’s a story I’ve seen countless times. I also struggled to connect with Tom’s character at all. We were shown too much of his bad side before getting to actually care for him.

So in the end, I have to land somewhere in the middle. I adored one half of the movie and really disliked the other half. It was still an interesting, well-made movie though, and I’d still wholeheartedly recommend it for Tom Hanks’ performance alone. He never turns in a bad performance. 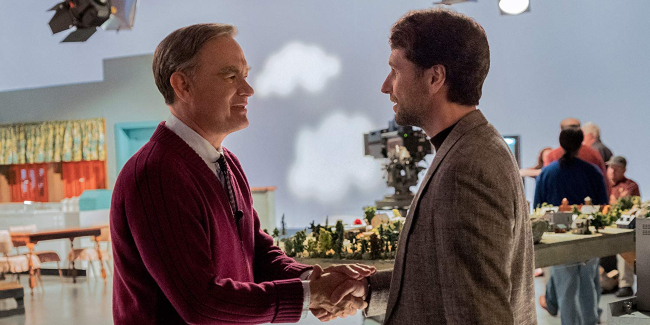 Best Bit: There’s a scene in a diner where Mr. Rogers tells Tom to take a minute’s silence to think. All the background noise quietens down slowly, and Mr. Rogers looks at the camera, directly at us. It was such a surreal moment and really made me stop and think!

Worst Bit: I know I’m struggling with a movie when I start nitpicking at stupid things. In Ad Astra (2019) it was the absurdity of a Subway sandwich shop on the moon, in A Beautiful Day in the Neighborhood it was how Tom is never holding his own child. Hold your baby, Tom!

Fun Trivia: During the TIFF post-film panel, Tom Hanks mentions how he wishes he and his son (Colin Hanks) at 3 years old watched a half hour of Mr. Rogers a week so he could learn that it is okay to be sad. Hanks feels children don’t learn the importance of expressing emotions from a young age and Mr. Rogers did an excellent job explaining this.

My Rating: 3 out of 5 baby car seats which it is NOT okay to let your baby sleep for hours in, Tom!