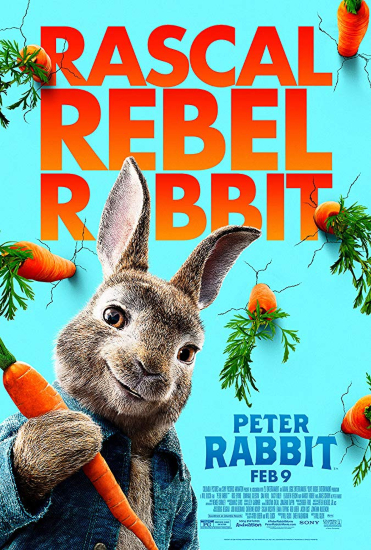 Plot: Based on the beloved character Peter Rabbit by Beatrix Potter. Peter Rabbit and his friends are suddenly granted the freedom of Mr McGregor’s vegetable patch when he passes away, but their fun and games soon come to an end when McGregor’s nephew takes over the ownership of the estate.

My Thoughts: Oh how sweet, Allie is starting to watch movies with her kid! Nope, sorry. I’m deep in Star Wars withdrawal and so last night once the kiddo was in bed, I curled up on the sofa for a double dose of Domhnall Gleeson and Daisy Ridley. What can I say? I’m desperate – and it’s been a while since I went on a Domhnall Gleeson binge. Plus I have to admit, I saw the trailer for the sequel and it actually looked quite funny.

Bias be damned, Domhnall Gleeson was an absolute star in this. He really went and threw his all into this movie. He has such a flair for comedy and his rages are hilarious. If General Hux could have had an alternative ending, let it be this movie. Gleeson was literally channelling his inner Hux the entire time and I was 100% there for it. I love the idea of him trying his best to chill out, trying some bird watching as a hobby that he’s absolutely terrible at.

As for the movie itself, I totally get it if you don’t like it. I watch too much Peter Rabbit on a daily basis because of the animated show that’s on Cbeebies every day, and it’s a strange set-up. Like, I’m sorry, but these rabbits are absolute jerks. They’re thieves, and in the movie, they’re even worse. In some scenes, the movie plays out like some sort of reverse Home Alone where Kevin is actually the bad guy?! 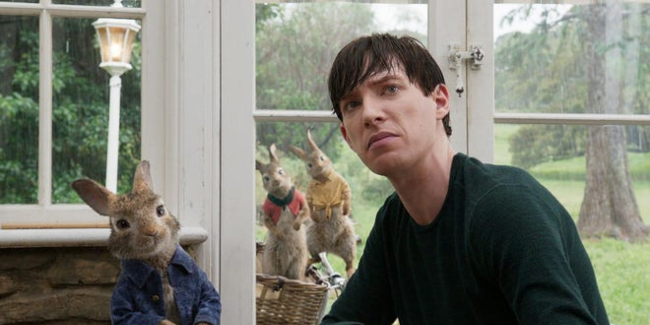 If you fell for the charms of Paddington (2014) then do me a favour and give this a go. It might not pack as much charm, but it’s essentially the best romcom of 2018.

Best Bit: How about Domhnall Gleeson beating the crap out of a Harrods bear? Or saying “I’m chill, man” whilst strangling Peter? Or basically any time Daisy Ridley’s CGI bunny was on screen? There were so many great moments. Lots of ‘blink and you’ll miss it’ jokes too like the Bananagrams game.

Worst Bit: As much as I strangely loved this movie, I just can’t see (hear?) past James Corden’s voice as Peter Rabbit. He doesn’t even try. It’s just…his voice. James Corden went from being a beloved, little-known star in the UK to making it big worldwide, getting big-headed about it, and now he’s just kinda irritating.
Also – how dare you dye General Hux’s hair black. How very, very dare you.

Fun Trivia: In February 2018 – 24 hours after its release – Sony apologised to advocates from food allergy groups who said the scene with a farmer going into allergic shock isn’t funny and also encourages food bullying.

My Rating: 4 out of 5 ice cream trucks with flashing lights. I don’t know why but that joke really tickled me!