Welcome to the last Thursday of the month, or as anyone who takes part in Wandering Through the Shelves’ Thursday Movie Picks calls it, TV edition Thursday! She’s picked spooky themes for the whole of October and this week is no different. Thing is, I’ve struggled enough with picking horror movies, and I watch so little TV! I could name you 3 horror TV shows quite easily but it would make for a sucky post.

Here, there’s Sleepy Hollow which I never watched past Season 2, there’s The Haunting of Hill House which scared me so much I couldn’t make it through the first episode, and the follow up The Haunting of Bly Manor which I also haven’t seen more than one episode of (because it bored me to tears, to be frank).

So I’m going to have to think out of the box. Thankfully one of my favourite shows ever, Brooklyn Nine-Nine, has a Halloween episode every season, and they are FANTASTIC as every one is a Halloween heist. So, I bring to you, ranked, my 3 favourite Halloween Heist episodes.

Jake and Amy are one of my favourite ever fictional couples so their first Halloween Heist together was always going to be a memorable one. I just loved how both Jake and Captain Holt wanted Amy on their team for fear she was a double agent, leading to a great twist at the end, albeit one you all probably saw coming.

This one was great for so many reasons. Firstly we have Gina taking more of a lead role which is never a bad thing. Then we have Rosa and Amy pairing up, two characters with so little in common that it was somehow a match made in heaven, and how can I not mention the Boyle lookalike?! 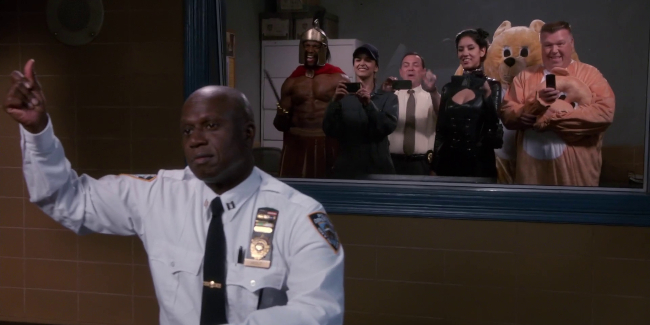 It’s no secret that Captain Holt is my favourite B99 character, I made a list of my Top 10 Captain Holt quotes which is crazily my most viewed ever post on this blog. It takes all comedy shows their first season to really establish their characters and to be honest Season 2 as a whole is probably still the best (in my opinion!). I think that’s why Captain Holt coming out of his shell and getting stuck into the spirit of the heist was such a pleasure to watch, especially when he played Jake for a fool and won.