Plot: 4 self-obsessed Broadway stars travel to a small conservative town in Indiana to help out a young girl whose school has cancelled their prom because she wants to take her girlfriend. By getting the prom back on, the stars hope that the publicity will boost their careers.

My Thoughts: Can I first acknowledge the crime that is the fact I had to watch this at home on Netflix with the background noise of my husband playing the PS5 instead of being at the cinema, dancing in my seat? Can you imagine if The Greatest Showman was released this year? Anyway – The Prom might not be my favourite musical ever but there was still so much I loved about it. Firstly, can I get a ‘hell yeah’ for Jo Ellen Pellman, starring in her first feature movie, acting alongside Hollywood legends such as Meryl Streep and Nicole Kidman and doing a damn fine job of it? Get it, girl!

You know me, I’m not a theatre person (I’ve seen 1 show in a theatre my whole life) so I had no idea this movie was based on a show, so I can’t comment on how it holds up as an adaptation. I was slightly put off by it’s runtime but honestly, the time whizzed by, I enjoyed every second. I maybe didn’t care so much for the Broadways stars because of their motives, but the rest of the characters? I was there for them. Keegan-Michael Key really surprised me. He elevates every movie he’s in but in this one he showed a side to him I’ve never seen before. His musical number ‘We Look To You’ hit me particularly hard, especially in a year like this. 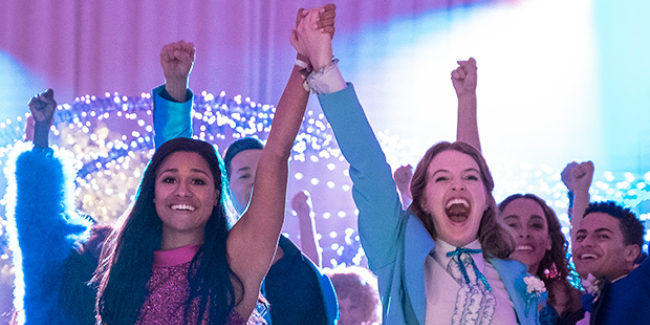 Best Bit: Although I really enjoyed the songs, they weren’t ones that stuck in my memory very well, although I’ll certainly be playing them in my car this week. One song in particular made me laugh and if I’d been in a cinema I might have been clapping along too. It was Andrew Rannells performing ‘Love Thy Neighbor’. It’s not a cheesy musical without a flashy number to rally an entire town!

Worst Bit: You might be wondering why I haven’t mentioned James Corden yet. I can’t quite put my finger on why but he just irritates me as a person. I think he’s got that aura of arrogance, and he often winds me up. I have to say, I didn’t mind him in this, but he was woefully miscast. I don’t have a problem at all with a straight man playing a gay man but was Titus Burgess every in the running for the role? He would have been PERFECT.

Fun Trivia: Nicole Kidman portrays Angie Dickinson, a life long chorus girl who just quit her job of 20 years in the musical Chicago after the producers never let her go on for the role of Roxie Hart. In real life, Kidman turned down the part of Roxie Hart in Chicago (2002).

My Rating: 4 out of 5 glitzy dresses…give it some zazz!