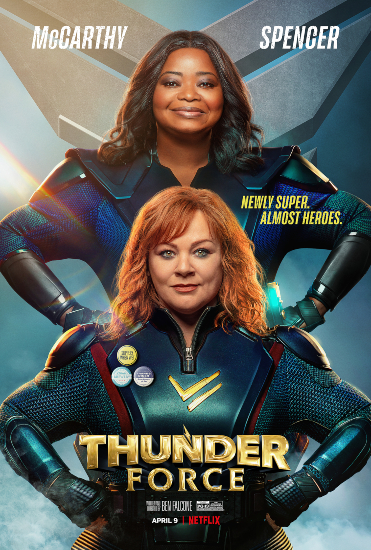 Plot: In this fictional version of the US, supervillains are rife and things are just getting worse. Thankfully, Emily Stanton (Octavia Spencer), a highly-intelligent scientist, has developed the means to give herself superpowers in order to stop the villains. Things don’t go to plan though when her old childhood best friend Lydia Berman (Melissa McCarthy) makes a mess of things and accidently gives herself some of the powers.

My Thoughts: At this point I think I have to throw in the towel. I have seen all 5 comedies directed by Ben Falcone and I can’t say that a single one is good. I might even have to rate them in their own little list. Why do I keep watching them? Even worse, why do I look forward to watching them? Somehow he always gets a great cast and it’s them that make me give Falcone another chance. I realise all this time I’ve blamed Melissa McCarthy for being so hit and miss, but the issue is who’s in the director’s chair! So safe to say, I did not love Thunder Force.

That isn’t to say it’s all doom and gloom. Let’s talk about some of the positives. A superhero movie with 2 leading ladies? Great! One of them is a person of colour? Excellent. Both of them have real bodies and no editing has been done to make them appear slimmer? Can I get a HELL YES?! Love that. It’s not all bad. McCarthy and Spencer also have terrific chemistry together on screen and I’d love to see them in another comedy together. But you know, maybe with Paul Feig behind it instead.

There are a few good moments but they’re mostly all in the trailer, that’s all you need to watch. The soundtrack is a lot of fun, too. Can you tell I’m really struggling to say nice things about this movie? It was watchable, I don’t feel like I wasted my time completely (I played on my phone whilst watching though) and it’s probably still better than the 2015 Fantastic Four movie. How’s that for a compliment?

Best Bit: Two words, JASON BATEMAN. He plays a villain called The Crab and he’s literally just a guy with crab claws for arms. There’s at least two occasions where he walks off screen sideways and it was the only joke I laughed out loud at. Eeasily the best part of the whole movie.

Worst Bit: I don’t mind so much having pop culture references in comedies, the biggest downfall of them is 5, 10, years later the jokes aren’t relevant anymore but is Fortnite still a thing? There were so many jokes referencing the game but I haven’t heard anything about it for a while now.

Fun Trivia: “The raw chicken is actually really thinly sliced pears treated with citric acid and food coloring,” says Falcone. “It was so believable that we all got completely grossed out every time we saw it as did everybody who had to eat it. Melissa was like, ‘I know it’s a pear, but it’s just hard not to imagine it as raw chicken.’ So that was difficult for her to get through.”

My Rating: 2 Fortnite llamas, because that’s as far as my Fortnite knowledge goes…other than ‘taking the L’ and ‘doing the floss’. I guess I really am old now.