Plot: Based on a short story by Stephen King – upstanding banker Andy Dufresne (Tim Robbins) is sent to prison in the 1940s for the murder of his wife and her lover. Whilst there he puts his accountancy work into practice and befriends several inmates, including a man named Red (Morgan Freeman), known to be able to smuggle things inside for a small fee.

My Thoughts: Time for another Film & Wine Club post! Last week it was finally one of my Dad’s movies picked out of the hat, The Shawshank Redemption. Cue a groan from my Mum but to be fair, I’ve seen this movie once before and it’s also IMDB’s #1 movie of all time, so we can’t poke fun at Dad this time around. It’s tough to watch a movie for the first time that’s been given such a high level of praise and keep your thoughts unbiased, I couldn’t put enough into words the first time I watched it but a second viewing really helped.

Simply put, it’s just fantastic story-telling. It’s a king-sized movie but the time feels like nothing at all, it’s so easy to just fall into Andy’s story and want to know what happens next, is he really guilty, will he ever get out? With a movie this good, it’s easy to see why so many other stories set in prison take inspiration from The Shawshank Repemption. I don’t remember the last time I felt such a strong connection with a character – the anger at the guards and the way they treat Andy, the pure joy seeing Andy, Red and the others enjoying a cold beer on the roof, just all the emotions!

It’s the ultimate story of hope, and I guess even a second viewing wasn’t enough for me to get many thoughts into words. I think my Dad got his own little bit of redemption for picking this movie, and he’ll need all the goodwill he can get because the next movie picked is another of his choices, Butch Cassidy and the Sundance Kid! It’s a movie I’ve wanted to see for a really long time now, but I’ve never been excited enough about it to pick it over anything else, so our little club is the perfect opportunity to finally see it! 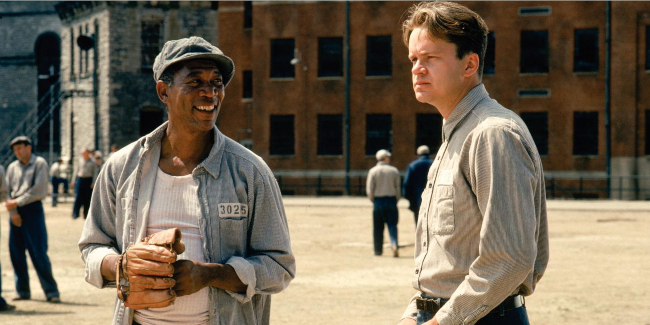 Best Bit: There are so many great moments but nothing can top the ending really, can it? Finding out how Andy did what he did, seeing Red finally get what he’s been working so hard on, and the final conclusion? It’s just perfect in every way.

Worst Bit: The introduction of Tommy (Gil Bellows) was such a pivotal part of the story, and whilst we were all wondering of Andy was guilty, Tommy gives us the answer. What happens after that? The rage!

Fun Trivia: Andy and Red’s opening chat in the prison yard, in which Red is throwing a baseball, took nine hours to shoot. Morgan Freeman threw the baseball for the entire nine hours without a word of complaint. He showed up for work the next day with his left arm in a sling.

My Rating: A full 5 out of 5 harmonicas that Andy had to get through Red’s competitor.