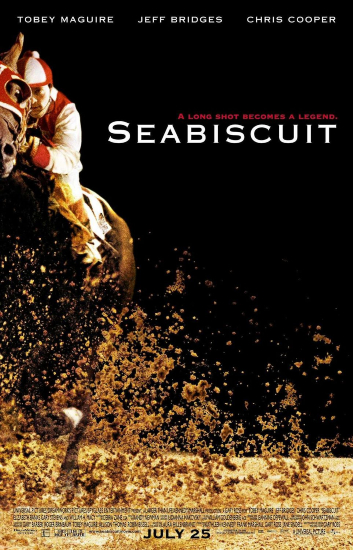 Plot: Based on a true story, Sseabiscuit was an undersized race horse who took the racing scene by storm during the Depression-era, right when people needed an underdog story the most.

My Thoughts: Welcome back to Film & Wine Club! We’ve each thrown another 3 movies into the hat and first pick is one of Dad’s – Seabiscuit. It’s safe to say my Mum wasn’t looking forward to it. Drama, history, horse race, Depression-era was enough for her, I think. But just like the entire of the USA back in that day, that small horse won us over. Tobey Maguire plays a to-tall jockey who can’t catch a break, Jeff Bridges plays a once-successful car maker trying to rebuild his life after the death of his son, and Chris Cooper is a loner with a natural talent for rearing horses. Together, they’re a dream team.

It’s your typical Oscar-bait movie really but movies about horses don’t have a wide appeal. That’s where the talent of the actors and the directing comes into play and I can honestly say I loved every minute of it. Clearly it’s a favourite of my Dad’s but I imagine he might have been regretting his choice when Mum and I asked “Is that Seabiscuit?” every time a horse came onto the screen. By the final two races even Mum was out of her seat shouting encouragement and that is honestly the best review I can give – it tells you all you need to know!

So here I am, doing something I never expected I would be doing, and I’m recommending you a movie almost two and half hours long about a horse. It’s just entertaining, and heart warming. Let’s hope Seabiscuit has built up enough karma for when it’s Dad’s next movie, eh? Well, the next movie out of the hat was one of mine, and it’s Fargo (1996). It’s been a long time since I’ve seen it but it’s always stuck with me so I hope my parents enjoy it too. Watch this space!

Best Bit: Easy, it has to be the moment that Seabiscuit won the race against War Admiral. It was the perfect victory, especially after all the animosity caused by War Admiral’s owner’s refusal to even have the race in the first place.

Worst Bit: I was gutted when Red (Tobey Maguire) couldn’t ride Seabiscuit. Red lost his family so early in life and racing was all he had. There were no ‘bad’ moments in this movie for me, just a lot of sad ones! It was slow going until the trio got together though, and I feel like Elizabeth Banks was completely underused. Those are my only complaints.

Fun Trivia: The companions Seabiscuit is given to calm him down were actually used in real life. The stray dog was named Pocatell. The female horse, Pumpkin, would accompany him to all his races through out his racing career.

My Rating: 4 and a half horseshoes that got given away to all the press that turned up.