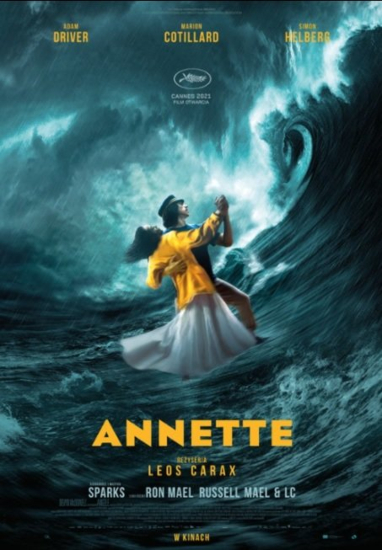 Plot: Henry McHenry (Adam Driver), a stand-up comedian and Ann Defrasnoux (Marion Cotillard), an opera singer have a seemingly perfect life in front of the press. They have a child together, named Annette with a surprising gift.

My Thoughts: …I’m not even going to pretend that this review will be coherent. I’ve sat on my thoughts for nearly 3 days now and I’m still not any clearer. One word of warning, if you have an interest in Annette, close down my post and come back when you’ve seen it. I won’t talk about any big moments in detail but it really should be seen knowing as little as possible. I was expecting weird, I was expecting bizarre, but I was still left completely speechless. This is a musical, but it’s not The Greatest Showman or La La Land! There’s singing and dancing on a boat in the middle of a storm, a singing puppet, and let’s not forget singing into a vagina…

Let’s start with my reason for watching, Adam Driver. Seriously, the things I have watched for my crushes! I’d love to have been a fly on the wall when he discussed the script over the dinner table. He clearly enjoys these kind of roles and fair play to him for being able to do that! It’s very much his show but oh am I fed up of him playing a douchebag. I loved the earlier parts of the movie where it hinted towards Henry’s dark side and what he was capable of.

The entire movie just wasn’t what Ii was expecting at all, I’d gotten it all backwards in my mind. I thought the individual scenes themselves would make sense but the plot itself would be impossible to get my head around, but it was the other way round instead. There’s a very clear, simple story here, it’s the detailed elements that are…out there. I can’t criticise the actual quality of the movie though, it’s just too far away from my comfort zone for me to truly love it. Between watching something original and strange or generic and samey however, I’d pick strange every day.

Best Bit: I can’t say the line itself for spoilers, but the line that Annette says after refusing to sing at the end of movie was pure gold. You know the Chris Pratt, shocked face gif? That was my exact reaction! The final scene itself was brilliant, though. I was still confused but after poking fun of the entire movie from start till that point, that final scene had me in near silence the whole time.

Worst Bit: Some serious Twilight vibes with that puppet/doll! Seriously. She was equal parts adorable and straight up terrifying. I can’t wrap my head around it. And why was it never explained where that chip in her head came from?! We already know she got sat on, what else did the poor thing go through?!

Fun Trivia: While filming in Brussels, Leos Carax’s dog “Javelot” got scared by passing traffic and ran away, leading Adam Driver to post a filmed appeal on social media to help find the dog, re-tweeted by several people including Mark Hamill. Javelot was then found safe and sound in a nearby train station.

My Rating: 3 cribs that will never not be funny to see the hulk that Adam Driver is lying in them with his legs sticking out.