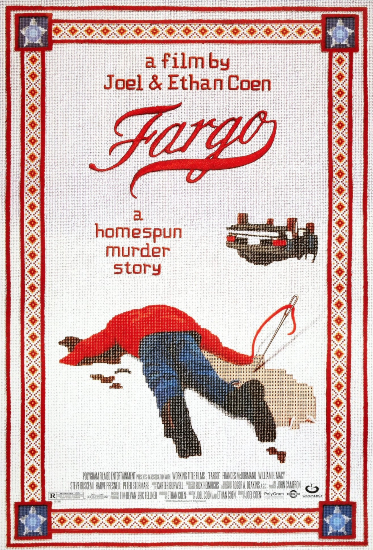 Plot: Jerry Lundegaard is in a lot of financial trouble and is running out of options. Asking his wealthy father in law is out of the question so he hires two henchmen to kidnap his wife, with the aim of targeting her father for a hefty ransom fee.

My Thoughts: Mine and my parents’ Film & Wine Club had to take an extended break thanks to a COVID-related false alarm and a holiday (not mine) but we’re back watching great movies, eating tasty snacks and drinking fine red wine. Last week was one of my picks, the classic crime-gone-wrong movie Fargo. I first watched it years ago just before the TV series started, but here’s something strange. I remember loving it, hence me picking it for the club but I went back to my old blog to find my review in case I’d written anything smart or funny I could shamelessly reuse (I hadn’t) and I only gave it a 7/10. I guess it grew on me with time!

Fargo is just such a crazy story, it’s really hard not to enjoy it. From the conception of this awful idea of Jerry’s to him trying to cancel the whole thing, to the string of bodies left in the wake, it’s a wild ride from start to finish. We have no idea whether to feel sorry for Jerry or to hate him, and then there’s Marge (Frances McDormand), my favourite cop ever, possibly. Anything you can do, Marge can do better. Whilst heavily pregnant.

It’s the dark humour that does it for me most of all. When else can you laugh about such tragic events and have it not feel strange to feel that way? Steve Buscemi plays the character that brings the most laughs, I think. Him forever bickering with his partner in crime who barely says a word, driving through a car park as fast as possible holding his wounded face that’s bleeding everywhere, and finally being far too greedy for his own good, he just plays a really interesting character! Definitely a movie you have to watch if you haven’t already.

Best Bit: Let’s face it, is it possible to watch this movie without endearingly using the word ‘yah’ in excess afterwards? Because it wasn’t for us, and I just love the Minnesotan accent.

Worst Bit: It bugged me the first time, and it bugged me the second time too, I’m just not a fan of the dinner scene with Marge and Mike. I get that it served a purpose to show us how Marge thinks, but it’s the only scene that feels out of place in my opinion.

Fun Trivia: When Carl Showalter (Steve Buscemi) character calls Jerry Lundegaard (William H. Macy) for the deal to be done, he tells him, “Thirty minutes, and we’ll wrap this up.” From that moment, the film’s running time left is exactly 30 minutes.

My Rating: 4 and a half wood chippers, that you’d be surprised to learn can shred a lot more than wood…

I should point out that I’m a little behind on my Film & Wine Club posts, we’ve already watched another of my picks, The Nice Guys (2016) AND picked the next movie out of the hat which also happened to be another of my picks! It was Little Miss Sunshine (2006).