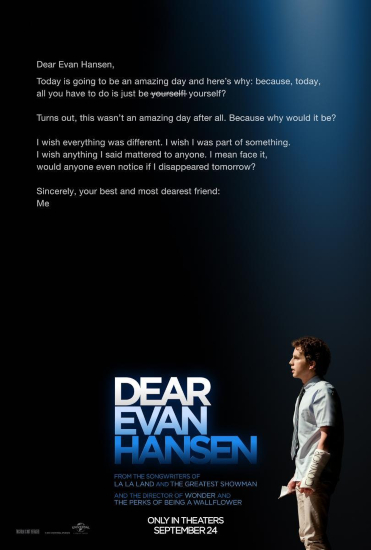 Plot: Evan Hansen (Ben Platt) gets caught up in a lie after a letter he wrote to himself as a task to help him with his anxiety is mistaken for the suicide note of another classmate.

My Thoughts: What a rollercoaster. I’m not familiar with the award-winning musical but when the first trailers for Dear Evan Hansen came out, I was so excited. I’m a sucker for a musical with catchy tunes, and this looked exactly like something I would enjoy. Then I saw all the fallout about Ben Platt playing the lead, and CGI de-aging technology being used on him, and lo and behold, it’s now hailed the new Cats (2019). I was a bit gutted, and the wait for the UK release didn’t bother me anymore. Now it’s finally here and I still had to see it for myself to see if it really was that bad!

Ben Platt is the least of this movie’s problems, honestly. I didn’t have a problem with him at all. He would have looked much better without the CGI. Sure, he looks too old to play a school kid but he isn’t that much older than most of his co-stars! You don’t see the internet kick off when Hollywood decides every husband aged 40+ needs a wife half his age, do you? So no, that wasn’t an issue for me. The songs were good, if not entirely memorable with the exception of You Will Be Found, but I missed the magic of a musical where everyone on screen was part of the song. In Dear Evan Hansen it’s as though the background characters don’t notice a thing, and I get it if it was a deliberate choice but I didn’t like it.

No, the real problem I had was Evan’s actions. The fact that he let that lie go on for so long and drag the family down with him was just unforgiveable. Plus, you can’t fool me that someone suffering so badly with anxiety could even go through with that. There’s just no way, it’s completely unbelieveable. Was the story told differently in the original musical? Or am I picking faults with the only part of the movie that shouldn’t be picked at? Honestly, I don’t know.

Best Bit: Kaitlyn Dever is easily the best part of this movie, I love her. As for a particular moment, You Will Be Found is such a powerful song, and the only time in the movie I actually cried. Love that song!

Worst Bit: It was a weird crowd in the showing I was sat in at the cinema. There was only 1 showing that day so it was full, and a mix of couples where one half was clearly there against their will and college kids. In the awful moment when Evan finally confessed to what he had done, several people actually laughed, which says everything I guess, doesn’t it?

Fun Trivia: Ben Platt and Colton Ryan are the only two members of the original Broadway cast (Ryan being an understudy in that production) to return for Stephen Chbosky’s film.

My Rating: 2 gluten-free cherry pies that I would rather eat than watch Dear Evan Hansen again, sadly.