Anyone who thinks cinema is dead should visit my local on a Tuesday night. Maybe my awful Fifty Shades review has brought in extra punters (ha, like anyone reads this anyway) or maybe it’s because the place has brought back every Best Picture nominee, but as I pulled onto the car park on Tuesday night I had to kick my husband out of the car while I parked to grab a spot in line, because it had reached the door!

Thankfully, the cinema had put on 2 screens for John Wick: Chapter 2, and a good job too because even our second screen was jam packed. Call me naive, but I didn’t realise John Wick was so popular! I watched the first last year and enjoyed it plenty, but I’m not well versed in action movies.

You’re best to catch up before starting Chapter 2, because it picks up almost where the original left off. John’s got himself a new dog, but he still wants his car back. John (Keanu Reeves) has a knack of getting what he wants, and I hope his car gets fixed in John Wick: Chapter 9 (release date 2030), because it was pretty sweet. Putting the car aside, things are about to get real, because John owes some guy a blood debt, and saying no quite clearly isn’t an option.

Here’s what’s so great about Chapter 2. It takes the world we were introduced to briefly in the original movie, and expands on it hugely. The organisation John Wick worked for is huge, it has it’s own 5* hotel that acts as a safe haven for the agents, they have their own set of strict rules, and a huge team of tattooed ladies working in the top secret admin area operating machinery from years ago. It’s all quite fascinating, and makes you feel like a very small part of something huge.

Then you’ve got the action scenes themselves, which are second to none. My husband is adorable with movies like this, he gets so sucked in to the action that I swear he “feels” the hits taking place. You’ll hear his gasp and grunt and if someone gets hit in the throat, he’ll actually cough. Bless him. But yeah, the action is great. If you raved about John Wick taking guys out with a mere pencil in the first movie, you’re in for a treat. 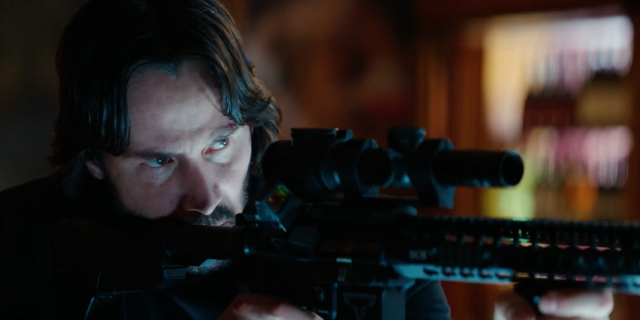 Let me get my gripes out of the way. Firstly, a big screw you to the BBFC who have ruined a second movie for me with their stupid ratings screen before the movie. How did they ruin it this time? Next to the rating, along with ‘strong violence’, they included ‘suicide scene‘ (highlight the text if you want the spoiler). Thanks, BBFC. Next, what was the point of Ruby Rose’s character being deaf? Just another reason for the really cool subtitles? In fact, what was the point in her character at all?

One more thing that I actually found quite funny. Everyone pays for goods with these fancy looking coins. What does one coin buy you? Anything as extravagant as a team of people to clear a room after an assassination for you, or an unlimited stay in a top hotel. What does one coin also buy you? A bourbon and a gin at a bar. Excuse me?!

Forgive my rants, I did quite enjoy this movie. It’s been perfectly set up for a third instalment, and I’ll be looking forward to seeing it. John Wick: Chapter 2 gets 3 and a half pencils out of 5 from me.

Preparing for a house move is going as well as it can do right now. Our weekends have been spent doing big sort outs rather than relaxing, but it feels good to make a head start at least. There was a moment of sadness in the house on Saturday when my husband had to pack all of his DC, Marvel and Star Wars Lego away in plastic storage boxes, so the timing of a preview weekend for The Lego Batman Movie couldn’t have been more perfect! 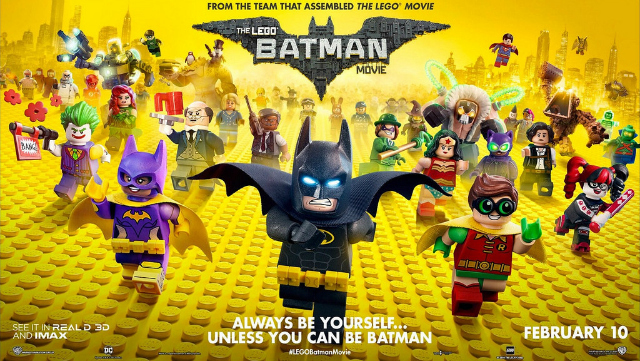 If you watched The Lego Movie back in 2014 (clearly The Academy didn’t because it was ROBBED of a nomination) you’ll already be aware of Lego Batman, voiced by Will Arnett. He’s back, with his own movie this time, and I’m willing to bet my hard earned cash that it’s the greatest DC movie that’ll come out this year.

It’s common knowledge that The Joker is Batman’s greatest villain. Sure, Gotham City has many great bad guys, but it always comes back to The Joker. That’s played on throughout the entire movie, in a humorous, anti-romcom kind of way, which never gets old. The Joker is voiced expertly by Zach Galifianakis, and plays a huge role in this movie, unlike that other recent DC movie where a green-haired Joker barely featured.

To attempt to list the number of characters that feature in this movie would take forever, but it has Justice League members from Superman to Martian Manhunter, and Villains from Bane to The Condiment King. There are also some err, other villains that I don’t think anyone was expecting to turn up. To tell you would be a spoiler, but one character in particular, voiced by Jemaine Clement was simply hilarious.

The plot is simple enough, and if you’ve seen the trailers you’ll know most of it already. Batman refuses to admit to the Joker that he needs him, so the Joker sets out to prove him wrong. Along the way, Batman accidentally adopts a young orphan by the name of Richard Grayson (Michael Cera) who you may know better as Robin! Robin just wants a family of his own, and Batman’s greatest fear (apart from snake clowns) is being part of a family again, so that causes issues along the way. It’s a plot that the kids can keep up with, but there’s so much else for the grown ups to enjoy.

I’m not well versed in Batman lore, but I understood enough references to feel part of it all. There are references everywhere, for Batman fans of all ages, and I have a specific moment in my mind when I say that. The soundtrack is great, but the best tracks are the ones that Batman himself sings/beatboxes/raps. He even narrates the only boring part of movies, the opening title credits!

The Lego Batman movie will appeal to all ages, and just like it’s predecessor, it demands at least one rewatch to spot all the hidden jokes that the animators have hidden. It’s the perfect movie to unwind with in between all these dramatic Oscar movies! 4/5 Lego Bricks from me! Just be careful not to step on them…