Ah January, the time when cinemas around the world are filled with terrible movies…unless of course you live in the UK like me. January and February are the months when we finally get the award-nominated movies, and they’re the months that I desperately scrabble around to try and watch them all in time for the big Oscars night (and of course, fail). If there was one movie that I couldn’t miss however, it was Three Billboards Outside Ebbing, Missouri.

Thanks to being away from the movie world for so long, I only actually heard about this movie last week, but it’s been advertised everywhere now! From what I could tell, it looked bat-shit crazy and had one of the best casts I’ve ever seen, and I was right on the money with those assumptions.

Mildred (Frances McDormand) lost her daughter in a rape and murder case, and after 7 months with no arrests or even leads, she reaches the end of her tether and hires three billboards, outside her town of Ebbing, Missouri no less, to send a message to the Chief of Police Willoughby (Woody Harrelson). Problem is, Willoughby is very well respected within the community, and he’s also dying of cancer, which leads to a lot of public outrage against Mildred. 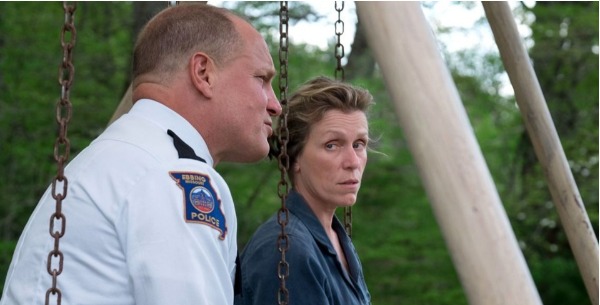 Then we have Dixon (Sam Rockwell), a hotheaded cop who’s also a bit of a simpleton…and a racist. Sam Rockwell is an absolute legend here and I’m so glad he’s picking up a lot of attention in the awards season! To tell you anymore about the story here would be an injustice as there’s a lot of twists and turns along the way, but it’s a thrilling ride.

What’s so great about Three Billboards is how perfectly it crosses the line between a hard-hitting, emotional drama, and hilarious black comedy. In fact, as I was watching it all I could think about was In Bruges (2008) and lo and behold, both movies are written and directed by the same guy, Martin McDonagh! Does that make me a real movie fan, being able to pick up on similarities like that?! Just let me pretend…

I was pretty sure I knew how it would all end, but I was still a little gutted when my suspicions were right. When the rest of the movie was so shocking, I guess I was hoping for a shocking ending too, that’s all. Regardless, this is a cracking movie that I’ll be watching again for sure, and recommending to as many friends and family as possible!

This messes up my usual ranking system of out of 5, but how could I score this movie any differently? 2 and a half billboards out of 3 from me (but really it’s a 4.5/5).

P.S. I want to be Frances McDormand when I grow up. Lady is a badass.