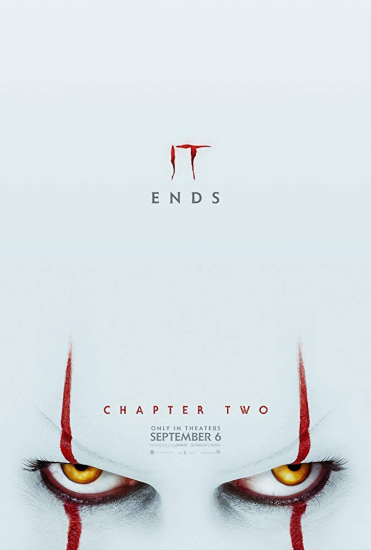 Plot: Set twenty-seven years after 2017’s It, the Losers Club have all grown up and moved out of Derry, except Mike, who has spent those years researching Pennywise and how he can be stopped for good. When Mike realises that ‘it’ is back, he brings the Losers Club back together to stop that evil clown for good.

My Thoughts: My toddler has finally gotten over her jetlag and realised that night time is, in fact, the time for sleeping, so I took the opportunity to go and scare myself selfless at the cinema. I did put a call out on my Instagram in case any family or friends wanted to keep me company and/or laugh at me panicking, but I had no takers so I made sure I sat in a corner where nothing could hurt me. I’m pathetic, aren’t I? Thankfully, Chapter Two isn’t as scary as the first, only because most of the scares kind of came with a bit of warning this time.

Can we talk for a moment about how amazing the casting choices have been for both movies? Chapter One was practically a coming of age movie that just so happened to be a horror, and the strongest part of Chapter Two was again the characters and how they’ve grown over the years. They’re all still losers in their own ways, and it was so easy to tell which of the kids they were playing the grown-up versions of.

One thing I worried about was the length. Chapter Two is just under 3 hours long, and you all know I’m the first to complain about length (that sounds a bit rude, come to think of it). I just don’t have the attention span for long movies, and my bladder is useless after having a baby. You know what, though? It didn’t feel anywhere near as long as it is – that’s how invested I felt in the story. If you’d told me it was half the claimed runtime I wouldn’t argue with you.

The only thing I picked fault with in Chapter One was that by the time it came to the final showdown, I didn’t feel that scared of Pennywise anymore. This time, it was the opposite. I was coping just fine until they went into the creepy house. For that final hour, I had to keep reminding myself to breathe!

Best Bit: Oh man, that cute little dog behind the ‘Not Scary At All’ door was Goose’s brother from another mother, wasn’t it? I kept looking away, expecting a scare, and just when I thought it was safe again and looked back at the screen, BAM.

Worst Bit: That mirrored room scene can GO TO HELL. Not only because it freaked me out and upset me, but the only man who should be running around a mirrored room and look damn fine whilst doing so is John Wick.

Fun Trivia: Bill Hader was unaware that Bill Skarsgård can actually move his eyes in two different directions. Hader asked Skarsgård what kind of editing was done to achieve the effect in the first movie. Skarsgård, in full costume and makeup, responded by saying “Oh, you mean this?” and doing it, causing Hader to freak out.
I’ve seen the photos of this and they’re glorious!

My Rating: 4 out of 5 red balloons, none of which you’ll find at my daughter’s birthday party I’m currently planning, because the mere sight of them now freaks me out!