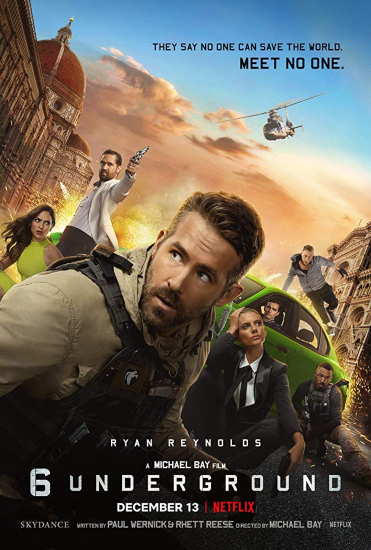 Plot: 6 underground agents work together on the world’s most dangerous, top-secret missions. All of them have buried their pasts behind them and are completely off the grid. Essentially, this is Michael Bay’s Suicide Squad.

My Thoughts: I’m avoiding writing anything about Rise of Skywalker at the moment for fear of creating something 1,000 words long and completely incoherent, so let me tell you about this piece of trash movie I watched earlier this week instead. If you have a Netflix account then it’s impossible to not know anything about it. I’ve seen it, and Netflix is still shoving it in my face. It’s the second most expensive Netflix movie out there, second to The Irishman.

Is it any good? That depends entirely on what you want from the movie. If you want a decent plot, character development, and a logical story that doesn’t overstay its welcome, you’re going to be disappointed. But if you want to watch Ryan Reynolds play himself, car chases, explosions, fight scenes and corny jokes in spades, then you’re going to love it. For me, it was half an hour too long to pass as a good movie. I just wasn’t interested enough, but it still had a lot of memorable moments.

I should probably tell you to avoid the movie but…there’s still something about it that’s fun. In amongst all the nausea-inducing shaky-cam moments and attempts at invoking emotion, there are jokes that land and action scenes that are actually stunning. It’s a mess, but it’s a beautiful mess.

Best Bit: The movie opens with a car chase scene and honestly? It’s probably the best I’ve ever seen. Maybe I haven’t seen enough action movies but this monstrous scene shows the realities behind a car chase this wild, pedestrians being flung around like crisp packets!

Worst Bit: Where do I even begin? There are plenty of cringy moments, but the one that made me laugh loudest was when a rooftop swimming pool was smashed open which caused more flooding than Sharknado!

My Rating: 2 and a half bottles of Aviation Gin, only the tip of the iceberg that is shameless product placement in this movie.