Happy Friday, folks! Oh boy it’s been a tough old week. The UK weather gave us one final, freak heatwave that’s over now, and my little girl is having a hard time. She was born a few weeks after the school cut off so loads of her friends at pre-school left at the end of summer to start proper school, and she won’t start until next September. I feel so sorry for her.

But you’re not here for my rambles, are you? You’re here because it’s Friday, it’s time for another Top 5 list and this week I’m bringing you what I feel have been the best movies of the year so far. Yes, we’re well past the halfway point of the year, but the last quarter is when all the hard-hitter movies come out so this top 5 will doubtless look completely different by the end of the year.

#5 Oxygen – Well, this little Netflix release took me by complete surprise. I didn’t even know of it’s existence until it was there one day on my home screen. I’m so glad I gave it the chance though! If you’ve ever seen Ryan Reynolds in Buried (2010), then this is like the Sci-Fi version of that. Very claustrophobic, not relaxing in the slightest but it hooked me straight away and the twists and turns all surprised me.

#4 The Suicide Squad – If you told me at the start of 2021 that I’d be putting The Suicide Squad in a ‘Best of’ list, I would have laughed at you. Firstly because at the time it felt like we would never be getting big releases in cinemas, but secondly because, well…we all saw the first one, didn’t we? The reboot/sequel/whatever it is surpassed the 2016 version in every single away, apart from the soundtrack maybe. They’re both great but the original soundtrack was killer.

#3 Vivo – I’m still riding the Vivo hype train, listening to the soundtrack every single day, so just know that it took a lot for me to be sensible and not make this my number 1. Maybe it’s not the best animated movie out there (it isn’t even the only one in this list!) but I appreciate a family story and I’m a sucker for a musical, especially written and performed by Lin-Manuel Miranda. Give it a go if you haven’t already, it’s on Netflix and while I can’t guarantee you’ll love it, I bet it’ll make you smile.

#2 Free Guy – I thought Ryan Reynolds was going to swoop in at the end of 2020 and save the day with Free Guy but the Delta variant had other ideas, and Free Guy got pushed back again into 2021. To say it was worth the wait is an understatement. I was expecting something generic and full of references, but something I would enjoy regardless and it ended up being so much more than that. It’s funnier than I ever thought it could be, and at it’s core it’s also a really great romcom!

#1 The Mitchells vs. The Machines – Still haven’t forgiven the name change, Connected was a perfect name. This is actually the only movie of the year so far I’ve given a full 5 stars to. Sony Animation are on a winning streak right now and I’m excited to see what they do next. The Mitchells vs. The Machines has such a great story at it’s heart, and somehow crosses into several genres without becoming too muddled. I’ve always appreciated animated movies so this will no doubt still be in my Top 10 at the end of the year, but I wouldn’t be surprised if something knocks it off the top spot. 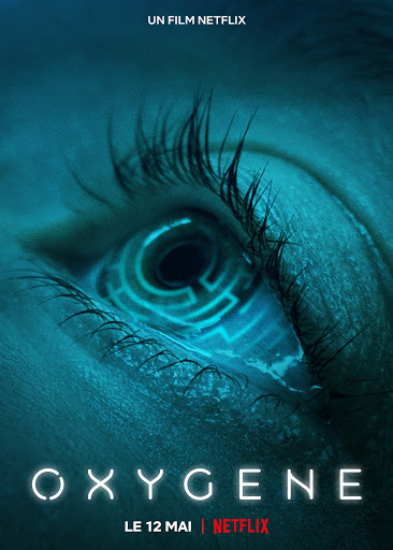 Plot: A woman (Mélanie Laurent) wakes up to find herself trapped in a cryogenic chamber with to recollection of how she got there. To make things worse, there’s been a malfunction within the chamber and the oxygen is running out fast.

My Thoughts: Today is a huge day in the UK! Our cinemas have reopened their doors. There’s still not much to see until summer but I’ll be there tonight with a travel mug full of tea! Normal service will resume shortly here with blockbuster reviews aplenty but I have to admit, it’s been a lot of fun having the time to watch smaller releases. I’ll definitely pledge to make more time for them in the future, but until then I’m bringing you a few thoughts on a new French movie on Netflix called Oxygen. Think about that Ryan Reynolds movie Buried (2010), but make it a high-tech sci-fi movie instead!

It’s impossible to talk much about this movie without giving too much away, you’ll just have to trust me when I say it’s well worth a watch. In the words of the great Bong Joon Ho, “Once you overcome the one-inch-tall barrier of subtitles, you will be introduced to so many more amazing films”. Of course, you also have the option of Netflix dubbing the audio for you, too. It’s not a dialogue-heavy movie either, so it’s perfect for movie fans wanting to dip their toe into foreign releases.

But anyway, let me tell you what I can, safely. It’s a great mystery, this woman who finds herself trapped has so many questions to answer. For a start, who is she? She’s struggling to recall any memories. What happened to the chamber to cause the damage to the oxygen tank? How is she going to get out? Having some questions answered just leads to more being raised. The chamber comes with an AI by the name of M.I.L.O. who, whilst helpful, can only do so much, and also becomes more of a hindrance in some moments. Just take my word and give it a go!

Best Bit: I…really can’t tell you that. But I’ll tell you something else. All great dramas have those few minutes of comedic respite, and Oxygen does too. You’ll find yourself chuckling at the line “Would you like a sedative?” eventually, I promise!

Worst Bit: This is one of those movies where I wouldn’t mind an ambiguous ending, the final shot didn’t stir much in me to be honest. I also found the first 20 mins or so to be quite slow, but it’s just the tension building and it’s forgivable by the end of the movie.

Fun Trivia: Anne Hathaway was originally attached to the project. She later dropped out and was replaced by Noomi Rapace. After the project was put into turnaround, Mélanie Laurent was cast in the lead role when Alexandre Aja came on board.

My Rating: This was originally a 4 out of 5 panic buttons, but after thinking on it for a few days, it’s a 4 and a half!