Well, this month has been pretty nuts, to say the least. on the first day of September I was on vacation in Disneyland, and today I’m dealing with a poorly toddler and working out how to deal with the fact my office is moving in December. Oh life, how you love to throw curveballs at me. Did I mention that said toddler is going to be TWO this month? I cannot even.

Amongst all the fun, jetlag, illnesses and stress I still managed to watch a few movies. I don’t know about you, but I’ve always found movies to be a good escape from the real world, even just for a couple of hours. I’m glad my movie mojo is back though because there are so many October releases I’m looking forward to!

First, the movies I watched but never got around to reviewing properly…

Okay, this was actually a rewatch, and I already did a full review back in July, but I needed to see Adam Driver in that smart car again and let me tell you, he didn’t disappoint. Still love that song, too.

I saw the poster on Netflix when I was having one of those ‘ugh, don’t know what to watch’ nights and genuinely thought it was Joel McHale. I realised very quickly that it wasn’t (I also thought Dax Shepard and Sam Rockwell were the same person for years) but I was in the mood for a romcom so I stuck it out. It’s your average, boy and girl who are only friends go to loads of weddings together and fall in love kind of movie. Nothing to go crazy about, but an enjoyable watch nontheless. 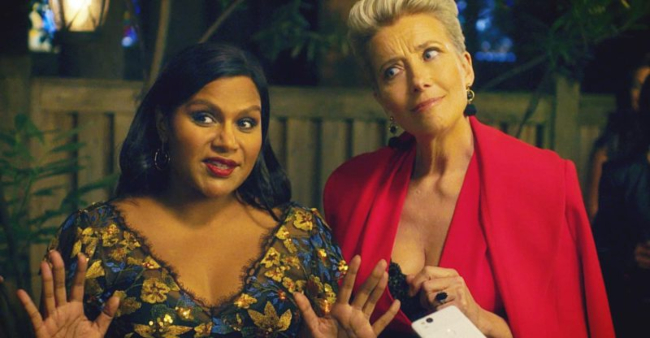 Despite the lukewarm reviews I was gutted to miss this in the cinemas. Emma Thompson seems to pop up in cameos in everything lately and she’s always the best part of whatever she’s in. She obviously has a bigger role in Late Night and is still the best part of the movie, but it wasn’t as good as I’d hoped. I’m all for political jokes but they got old really fast, and this movie isn’t going to age well.

What can I say? It’s a movie in which a scruffy Tom Hardy rescues an injured dog, adopts him and kicks the ass of anyone who dares to threaten said dog. If that’s not enough for you then ugh, there’s just no pleasing you!

Yes, I was in a VERY odd mood the other night. Jim Carrey movies were my goto in my teens and yet I don’t know how I avoided Ace Ventura for so long! I loved it, it cheered me right up and I can tick another Carrey movie off my list. It makes for a funny watch in 2019 though, there’s no way a script like this would be greenlighted in this day!

And then, just in case you missed any, these are the movies I watched in September that I did write a full review for:

Plot: In the aftermath of World War II, British Colonel Lewis Morgan and his wife Rachael are assigned to live in Hamburg, in the house of German widower Stefan and his daughter. Rachael and Lewis’ relationship is strained enough already, but these current living conditions push old and new tensions to the surface.

My Thoughts: Are you even on a long haul flight if you don’t have a dodgy movie watching experience? Thanks to my cinema membership I’d seen most of the movies that the in-flight entertainment system had to offer, but I missed The Aftermath. I’m not a huge fan of period dramas but when you’re stuck thousands of feet in the air with a sleeping toddler across your lap, it’ll do. I should also mention I had no headphones so I watched the whole thing with subtitles only.

You know what, I actually really enjoyed it. I wasn’t bothered by the war setting, and goodness me was the plot predictable, but without sound you can really focus on the performances, and they were stellar. Perfect casting all round! I watched the last 20 minutes again back at home with sound because I fell asleep, so I got to experience the real cheesy lines twice. I mean, when you’re about to say the words to end a marriage, can you really be ballroom dancing at the same time?

Also, why is Alexander Skarsgard so dreamy? I’ve watched him twice recently, this time as a potential Nazi and last time as a complete dirtbag and yet…I don’t know. Guy knows what to rock a sweater vest, that’s for sure.

Best Bit: As if the romance blossoming between Rachael and Stefan couldn’t get any sweeter, they end up having a Beauty and the Beast style snowball fight. I was so ready for the teacups to start talking.

Worst Bit: I’m sure ‘back in my day’ they edited the crap out of movies before putting them on these flight entertainment systems. There’s nothing like being sat in the aisle seat close to the toilets on a full flight to find yourself confronted with one of the slowest sex scenes ever. The cringe is real!

Fun Trivia: Keira Knightly uses a body double for the nude scenes in the film.
Apologies, but this was literally the best bit of trivia that IMDB had to offer me…

My Rating: 3 and a half snowballs that I could totally use in a romantic snowball fight, but I’m too competitive and like to aim for the face.